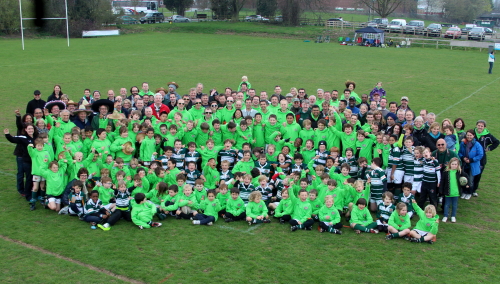 Rugby is thriving in West London at Ealing Trailfinders Rugby Club and The Club is currently as successful as it has been during any time since it was formed in 1871.

Our Youth Section is for players aged 13 to 19 and now incorporates the Performance Programme which feeds players directly into the senior development squad. The Youth teams cater for boys and girls at all levels of ability and currently have players representing the county at all age group levels, as well as players just being introduced to the game. The Youth play in the Hertfordshire and Middlesex leagues and, in season 2011/2012, were league winners at U14 level as well as winning Division Three at U16 level.

The Club is hugely proud of its Minis Section and each Sunday over 500 children, boys and girls, all play rugby in a well-organised, safe environment. The Section’s objective is that every child, from four years to U12, who plays at Ealing will find it a warm welcome and an enjoyable experience.

Ealing Rugby Club is run by the members for its members. It has a well organised army of volunteers who give up their time to coach, referee, manage, provide first aiders, car park and match day stewards, and many other roles. These, and of course the parents and family members who lend their support, were recognised by the award of the RFU Whole Club Seal of Approval in season 2011/2012.

Going forward The Club aims to ensure that it remains a secure financially independent Rugby Club that fields competitive teams at every level, with the finest Coaching and Refereeing, all recognised by an RFU Whole Club Seal of Approval.

The Club intends to build on its ONE CLUB ethos, to ensure that all members share in the success and enjoyment of rugby at every level, be it an individual team, a Section, or the overall community that is Ealing Rugby Club.

We will continue to develop the success of our semi-professional playing squad and to develop and extend the success of the Amateur, Youth, Junior and Social Sections of the Club. However it is our aim to ensure that the semi-professional playing squad remains integrated with the other Sections within The Club and will aim to strengthen its ONE CLUB ethos.