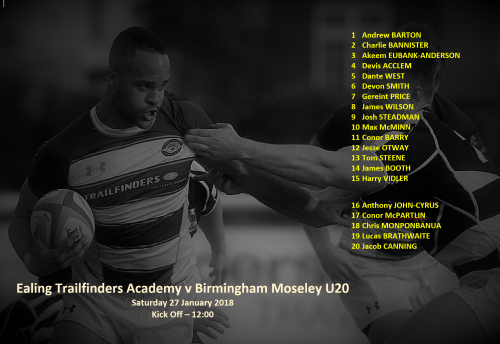 The Academy have named their side to face Birmingham Moseley on Saturday.

There are several new faces in the line up with debuts for no fewer than 7 players. The Academy U18’s provide 9 players, four of whom are U17.

Senior Academy player Conor McPartlin makes his debut for the Academy having recovered from injury.

Academy Director John Lacey said “We are all really excited to see this group of boys get on the pitch together. The group have worked very hard this week, training has been excellent.

What is especially pleasing is that you would be hard pushed to pick out the Senior Academy boys from the U18’s. The coaches from both groups deserve a pat on the back for that”.

Kick off at Vallis Way on Saturday is at 12:00 so please come along and support the boys. It makes all the difference hearing you cheer the boys on.