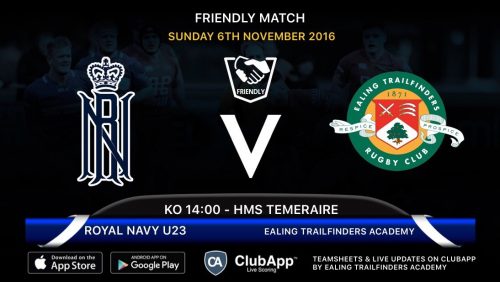 Academy Director John Lacey has named his squad for this Sundays game against the Royal Navy at HMS Temeraire in the historic Naval town of Portsmouth.

Tim Hitchcock returns to the starting line up at Loose head prop following a knee injury while prolific try scorer Alfie Hill forms a new back row with Marcus Lowe and Will Day. U18 Emerging Player Group forward Alex Niang starts in the 2nd row in only his second Senior Academy game with fellow U18 EPG member Zak Gregory also featuring on the bench.

Winger Reon Joseph is on County duty but the back line has a very familiar look to it.

On announcing the side, John said ” Tim has worked really hard to get back on the pitch ahead of schedule and trained really well on Thursday. We missed Alfie’s pace going forward against the Army last time out and look forward to seeing if he can continue his good form with 9 tries in 4 games. We are really excited to include U18 forwards Alex Niang and Zak Gregory and thank St Edwards School Oxford and Henley College for supporting the boys Academy participation.

The back line is really settling down and has developed tremendously this season, in the first half against the Army they looked really dangerous with and without the ball.

The Navy are going to be a real handful on Sunday, they’ve played 6 games already this season so will be by far the most organised side we have faced this season. We are their last game before the Inter Services Championship so will need to be on the ball from the start, we cant wait to see what we can do.”

It would be great to see some friendly faces in the crowd to cheer the boys on, if you can’t make the game, keep an eye out on Twitter @ETFacademy for updates