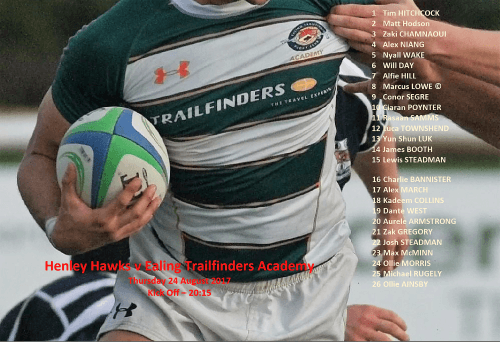 Academy Director John Lacey has named the Academy team that travels to National 2 South club Henley Hawks tomorrow evening. The fixture marks a huge step up in aspiration for the Academy, playing such a respected and established club as Henley is a massive test for the young Trailfinders.

It will be an interesting fixture as three of the starting line up will be playing for the opposition on loan this season, Skipper and No8 Marcus Lowe continues his association with Berkshire side for a second season having picked up Henley’s Young Player of the Season last year. He is joined by hooker Matt Hodson and centre Luca Townshend who will look to force their way into contention in the coming weeks.

There are big step ups for fly half Ciaran Poynter and wing James Booth who both impressed on debut last week.

John Lacey said “We are really excited to be able to play a fixture against a National League 2 side, we are looking to take some key learning points from the game. If we can dictate the tempo and impose ourselves for periods we will be over the moon.

The boys have worked hard through preseason and looked fit on Saturday, whether we can match the physicality of Henley will remain to be seen, but if we want to develop as players and as a team, we have to challenge ourselves against the toughest opponents”

Hope to see you there #yealing