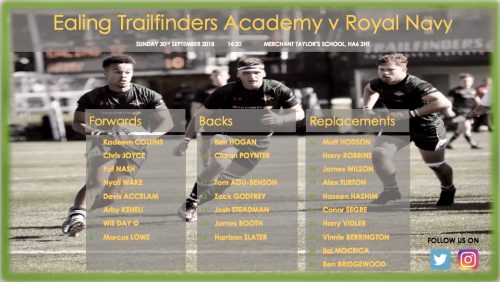 Academy Director John Lacey has named the side to face the Royal Navy on Sunday.

There are some forced changes from the team that faced the British Army two weeks ago. Injuries to starting wingers Josh Amadi and Ire Onabajo give James Booth and Tom Agu-Benson the opportunity to show their strengths.

Former skipper Marcus Lowe comes in at No8. Having started all four league games for Henley Hawks this season, he will be keen to make an impact on the game. Fellow back rower Arby Keheli also starts having impressed at London Irish Wild Geese.

“We’ve had a busy week with injuries but its the same for all sides, we are lucky that some strong performances with our partner teams and clubs have given us good depth this season.

It will be a tough game against the Navy who are always strong. Its going to be a challenge to match the physicality and tempo we played with against the Army. The surface at Taylor’s is excellent so we’ll hope to be ambitious in our approach.

Its nice to get 2 fixtures so close together, it means can keep focused on what we want to improve on without forgetting what we need to maintain too”.

It would be great to hear you all on the touchline, it makes a huge difference to the boys.