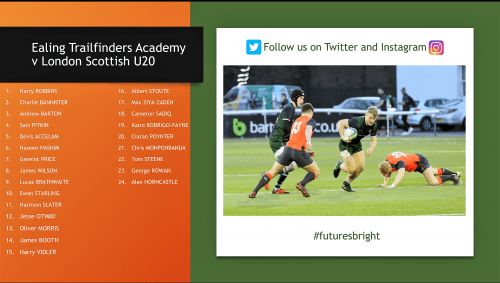 The Academy team to play London Scottish has been named. It contains some familiar faces along with some new ones.

Second Row, Sam Pitkin and Prop, Cameron Sadiq will make their U20 debuts. Both have impressed since joining the Academy U18 and have earned a chance to show what they can do in the Senior Academy rugby environment.

Academy Director, John Lacey said “Charlie Bannister will again skipper the side, he has worked hard to recover from a couple of niggly injuries. It shows his determination to get back for the last few weeks of the season.

Its great to see new players continue to join up with the squad, Cameron and Sam both deserve a chance to earn a spot for next season and we area excited to see how they go tomorrow.

We are also looking to go with a period at U19 group to allow some players who aren’t yet 18 to play in their preferred position. It shows great spirit between both clubs to make this happen. The collective commitment to player development is fantastic to see and shows both organisations truly believe in a player centred approach.”

Kick off at Vallis Way is at 19:45 and admission is free. Please try to get along and support the boys in the last game of the season.