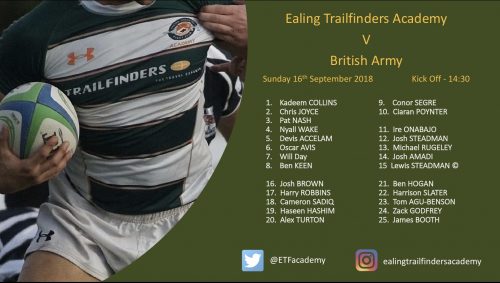 The Academy has named its team to face the British Army at Vallis Way on Sunday.

There proved to be many tough decisions involved and there will be some disappointed lads in the wider squad who missed out.

Conor Segre makes his return to the starting side after a summer of 7s with the Jamaican national squad. Ben Keen makes his Academy debut at No8 having imoressed in training. He will be well looked after in the back row by Will Day and Oscar Avis.

Academy Director, John Lacey spoke earlier about selection “I think it’s been the hardest selection meeting we’ve ever had. There are some exciting lads involved this season and I’m sure some will be hurting tonight.

We’ve worked really hard over the summer and cant wait to get back on the pitch, the Ruislip game seems like an age ago.

The boys should be under no illusions about Sunday, the Army will be very good and wont lay down or run out of steam. They had a good win last week against Hampshire which should ring some alarm bells for us. We’ve got to be on the ball from the first kick”.

Academy skipper Lewis Steadman added “After a disappointing loss against the Army Reds last year we’re eager to put things right. We want to start the season on the right note and build some momentum. We play the Royal Navy in 2 weeks so September feels special.

We have some exciting new faces who have brought some real energy to the squad. We also have a good mix of age groups involved so theres some youth and experience around. It’ll be a tough test, but we cant wait for Sunday to come around and get the season going”.

Kick off at Trailfinders Sorts Club is at 2:30pm and the boy’s would love to hear you cheer them on from the touchline.