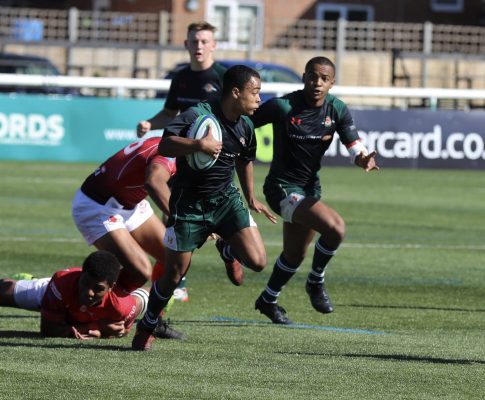 Perfect weather conditions and the excellent pitch condition at Vallis Way set the tone for what was to be a fantastic day for the Academy on Sunday.

Having prepared well all week the feeling within the squad was one of excitement and anticipation at what was sure to be a stern test of our mettle.

The first half was an even affair, while the Academy had dominance in the scrum, the Army’s line out and work from the base of their own scrum was excellent.

There were some good performances from scrum half Conor Segre and hooker Chris Joyce who consistently made ground with the ball in hand. Josh Amadi also impressed going forward. Two tries for winger Ire Onabajo caught the eye of the supporters and coaches alike.

In the second half, James Booth got over for a pair of tries, but No8 Ben Keen was the stand out performer, abrasive in attack and defence. He worked very effectively in the back row with Will Day and Oscar Avis.

Academy Director John Lacey said “We are really pleased with todays performance, we have worked hard on some small areas of our game. Our depth in attack has been way too shallow at times and we have drifted across the face of the defence instead of challenging it, today we were far more incisive.

We gave far too many penalties away at the breakdown against Ruislip, our work over the ball didn’t lack enthusiasm but was ill judged. We saw far better decisions in this area today.

We were really happy how the squad coped physically, we are fit and strong and really enjoyed ourselves today against an Army side that had real threats across the park”.

Our next game is against the Royal Navy at Merchant Taylor’s School on Sunday 30th September at 14:30