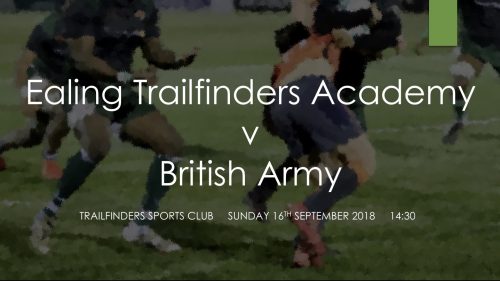 The Academy have begun their preparations to face the British Army at Vallis Way on Sunday.

It will be a special week in training as the players look to impress the coaches ahead of selection. This is always an exciting fixture in the calendar.

Academy Director, John Lacey said “This is always a special week for us. We are really honoured to play against the Service’s representative sides and the boys really look forward to the tough fixtures.

We have had a good summer of training and the new players have settled in well now. Last weeks cancellation was a little disruptive but it has given us a bit more time to sharpen up. The squad trained alone last night, without the coaching team. Its important thee lads take charge of the game and we were happy to let them work out how they want to play on Sunday.

We are very lucky to be able to work with the National Film and TV School again this year. They will practice a full Outside Broadcast recording of the game. The footage of last year was outstanding and we’d like to thank them in advance for their efforts this time around.”

Kick off on Sunday is at 14:30, why not come down and get behind the lads in what will be a great game.