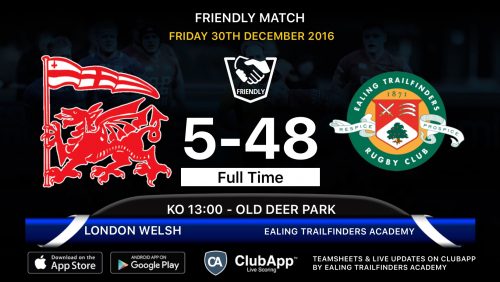 The Academy celebrated New Year early on Friday with a well executed win away at a foggy Old Deer Park.

In what was their first game in 10 years the newly re-formed Griffins fought with tenacity and heart but it was a more experienced Ealing side that took the spoils.

The scoring was opened by exciting winger Reon Joseph who chased a clever kick ahead by Josh Steadman, Steadman was next on the scoresheet, finishing a sharp move in the corner.

The young Trailfinders were on top in the loose and were producing a steady supply of ball for the back line but it was to be No8 and skipper Marcus Lowe who went over next with a short side rewind attack. London Welsh to their credit were next to score with a try of their own before Joseph scored his second shortly before half time.

The second half saw more tries for the Academy, Joseph completed his hat trick and there was a fine solo effort from scrum half Andrew Nurse before winger Lou Walker bagged a pair of tries to complete the scoring.

Hooker Chris Joyce was the pick of the bunch in possibly his best performance with the Academy, his set piece was excellent and he carried with power and determination. There were also good performances from Academy U18 players Alex Niang and Zak Gregory.

It was a great day for all concerned and especially exciting to see another Championship Club committing to a Young Player development programme. We wish them all the best and look forward to locking horns over the coming seasons.

Next up for the Academy are Birmingham Moseley later this month, the home fixture will be played at Merchant Taylors School in Moor Park, the game will be at U19 level so a great chance to see the next crop of youngsters likely to be moving into next years Senior Academy programme, keep an eye on here for more details.

We’d like to wish a happy New Year to you all and look forward to seeing you in the coming months.