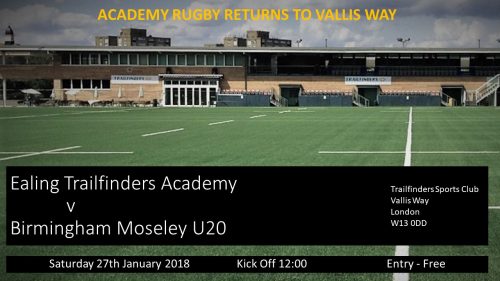 The next two sessions will be critical in the Academy’s preparations for the visit of Birmingham Moseley to Trailfinders.

After a good performance against London Welsh Griffins at the New Year, the squad make up changes again. This time more Academy U18 group players will be involved. There will also be a number of U17 age group players on the team sheet.

“Having U20 games at this point of the season really allows us to look at the younger lads in the Academy. We have been working with a lot of the U17/U18’s for several seasons via the Emerging Player Group. These games are their opportunity to show what they can do.

Moseley always prove a tough test, they are very direct and don’t take a backward step. We’ll have to be at our best from the start to be able to impose ourselves on the game”.

One player who wont be involved is U18 prop Harry Robbins who is rested before his London & South East Divisional trial on Sunday, I’m sure you’ll all join us wishing him the best of luck for the day.

Its an early kick off at Vallis Way so be sure to be there on time so you miss none of the action. There will be more Academy players in action for the Men’s section against Tring at 14:15 so why not make a day of it.

Keep your eyes open for the team announcement later in the week!