“The boys are back in town, the boys are back in town”…albeit it a different town, with our first game of the season. After a successful return to the Surrey Vets league last season (5th place of 14) we are playing in the newly formed Middlesex Vets league this year but planned a tough early season test against last year’s Surrey champions Barnes.

A strong team on paper was, however, immediately under pressure in the first half with the strong Barnes centre-pairing punching holes in the defence weakened by being one short on the pitch. Once 14-0 down the play settled and after good control of slowly recycled ball Eddie made a clean break to score an unconverted try.  Barnes responded with a well worked blind side break and another despite a steady period of Ealing pressure to take the score to a seemingly unassailable 26-5 halftime lead. On reflection green shoots were visible with committed defence from the backs (including a crucial stop from Jacko saving Rutherford’s blushes) on their own try line and well planned attack forcing penalties on the Barnes line.

What Captain Jake delivered at halftime needs to be bottled and sold on eBay as a “Turnaround Tonic” Victorian Quacks would be proud of as the boys came out of the blocks with two quick individual tries from Whitney. His grubber through for the second was reminiscent of Jamie George’s recent effort against Australia, not only because of similar body habitus. Pup’s score after a huge Gary Owen from the increasingly confident Gunny left boot, added to his nonchalant drop kicked conversions (where was the water boy with the kicking tee?), took the visitors to level pegging at 26-26; game on! 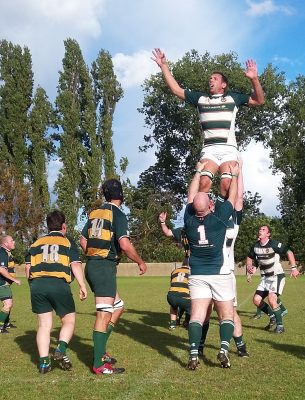 They say Geminis have two personalities and Jacko demonstrated he must be a June baby by smashing through the Barnes line only to drop the ball when grounding a certain score, securing a certain nomination on the opposite scale of MOM. However, almost immediately he made amends by diving over in the right hand corner to hand a 31-26 lead to the Evergreens despite now being down to 13 players having lost Eggnogg to a hamstring injury. Unfortunately Barnes’s never say die attitude was rewarded with a final try tying the scores at fulltime 31-31. This was as good a game as you are likely to see all season, with some fans commentating it was better value than the £8 they had splashed out to watch the Barnes 1st team in National 2 on the adjacent pitch.

Next match under flood lights on a Friday night at Vallis in a couple of weeks, be there…or be somewhere else I guess.