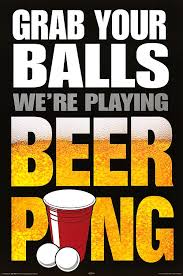 Following the huge success that was the  Men’s Section Race Night last October there is a Beer Pong Tournament on Saturday 17th January at Vallis Way. This is open to the players, their wives and girlfriends, and members and supporters of The Club.

During the afternoon there are three home matches, all kicking off at 14:15:

So those of you unable to travel down to Cinderford for the first team game come down to Vallis Way instead and support the Men’s Section teams.

After the match all will retire to the clubhouse for post-match hospitality and match awards.

Immediately afterwards we have a Beer Pong Tournament. This is a fund raising event for the forthcoming tour to Bucharest where we are the hosts of Rugby Dracula Old Boys, a pint of beer costs just 90p, and the traditional Ottoman cuisine is based on a wide range of vegetable and tripe soups with a characteristic sour taste [Wikipedia].

The Tournament is being hosted by Beer Pong Grand Master Champion Sean “Kenny” Kennett and Social Manager Des Crinion. Kenny will explain the rules for the tournament on the Evening. But for those of you that have no idea what Beer Pong is see Wikipedia.

The tournament entry fee is £10 or £5 for students. As usual Buffalo Rules apply throughout the evening. If you don’t know what Buffalo Rules are don’t worry, you’ll soon pick it up.

If you have any questions contact Des at descrinion@gmail.com