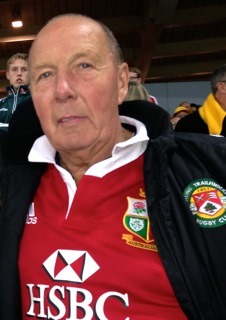 Ealing Trailfinders were sad to hear the news of the passing of long-time fan Brian Taylor this week and our condolences go out to all his family and friends.

A minute of silence will take place in memory of Brian before the British and Irish Cup match against Moseley this Friday and his rugby friends have written a tribute to him below.

Brian Taylor. 2 July 1944 – 7 December 2013
Unbeknown to him, Ealing’s Chris Kinloch holds the honour of providing the late Brian Taylor with a final try to cheer during November’s clash with London Scottish. Just who it was that provided Brian with Ealing’s first score to cheer many years ago is a lot less certain, although I’d guess he’s almost certainly well past his best playing days and probably sports a pair of NHS knees nowadays, just as Brian did.

Home and away from Berkeley Fields to TFSC, Brian loved watching and supporting Ealing RFC. At the matches, woe-be-tied anyone within earshot who was being less that confident about the day’s predicted result, I myself being a recipient of his ‘positivity lecture’ on many an occasion.

Having been an ex-sportsman himself, playing for QPR in the 60’s and even having stints with Bayern Munich and AC Milan, Brian would have appreciated Ealing’s current season more than most. He would have known, as only a sportsman would, that if you believe in yourself, play hard, play as a unit, then the results will come.

That result finally and deservedly came the following week in Jersey, but sadly Brian never got to witness this first league win of 2013.

Within 24 hours of our clash with London Scottish, Brian was unconscious in hospital having suffered a massive heart attack. Despite the efforts of the amazing nurses and doctors of Hammersmith Hospital, Brian failed to recover and sadly passed away last Friday. Brian leaves behind his beloved wife of 51 years, Evelyn, his daughters Lucy and Adele, his two granddaughter’s, Grace and Sophia, who he was utterly devoted to, and a large extended family that saw him as a great deal more than just Uncle Brian.

Brian was a West London lad all his life. Growing up in Shepherds Bush as one of the commonly known ‘Bush Boys’, Brian was well known and loved by many. His passing has been a huge shock to everyone who knew him and he will be greatly missed.

The Club has kindly decided to honour Brian’s commitment to the club with a minutes silence before our British & Irish Cup clash with Mosley tonight. Brian’s family are hugely grateful and touched by this gesture and would like to sincerely thank you all.

There will be a service at Ealing Abbey next Thursday 19 December at 11.00am; all are welcome.