Playing a team that finished mid-table in Zoo Shield 1 last season but opted to drop down to League 2, the Men’s 1sts needed a good start to show that there would be no repeat of the heavy defeat inflicted on the same pitch two years ago, but as in the last two games against Wimbledon and Shelford they instead started lethargically, and found themselves two tries down after just 8 minutes, both fashioned by incisive running and passing by the back line and both converted. Despite these early setbacks, the visitors inched their way back into the game with signs of scrum dominance, also feature of the previous game in the downpour at Shelford. Bury indeed opted on one occasion for a lineout instead of a scrum. The line-out too was to prove an area of strength for Ealing, although the opportunities to steal possession were limited by what appeared from the touch-line to be crooked throw-ins, not picked up by the referee. Despite signs of promise in the set pieces, Ealing were repeatedly beaten to the loose possession by a young and fit opposition and committed some costly handling errors. With less than a quarter of the game gone, fly-half Max McMinn was forced to leave the field with concussion after collecting a veritable ‘hospital pass’. 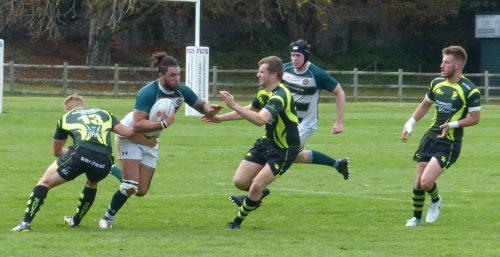 The Ealing back line enjoyed more opportunities as the game progressed, with powerful running by debutant Chris Rose on the wing and well-timed interventions by full-back Lou Steadman. With the fly-half causing havoc with weaving runs, Bury moved further ahead with tries on 18 and 30 minutes, securing a try bonus point, and Ealing’s first-half misery was complete in the last move before the break, with the home side pounding away at the line before the defence was finally breached.

With captain John Worthington forced off the field with an arm injury shortly before half-time, the prospects for the second half looked gloomy, but the second period brought a much improved performance throughout the team, to the extent that Ealing outscored their opponents after the break. They broke their duck with a try by Akeem Eubank-Anderson, who carried strongly all afternoon, following a strong and direct run by Alfie Hill, but this was cancelled out by a sixth home try shortly afterwards. With just over 10 minutes to go Ealing scored an excellent second try to confirm their resurgence, Steadman accelerating past the Bury defence and showing good balance to reach the line. Further dominance looked likely to bring a third try, but Bury eventually turned the ball over and created a try on the left wing, with the fly-half notching his sixth conversion out of seven attempts.

The final score of the day came courtesy of another fine run from deep by Hill as Bury started to tire. A fourth try would have brought a welcome bonus point, but the Bury defence held firm as the clock ticked down.

This Saturday, 30 September, the Men’s 1sts return to Vallis Way after two long away trips, taking on Canterbury with a 3 pm kick-off.