It has been a long five months on the sidelines for Ealing Trailfinders wing Phil Chesters after he was hit by a car at the end of March, but now he can look forward to competing for a place in Ealing Trailfinders’ opening Greene King IPA Championship match against London Scottish on 14 September.

The accident and his convalescence, that included a week in St Mary’s Paddington, meant he was a spectator when the team won promotion from National 1 to the Green King IPA Championship, but with less than two weeks to go before the club make their debut in professional rugby’s second tier, he is starting to show the form that made him a fans’ favourite at Vallis Way.

After a run-out for a development team on 24 August he was rewarded with a starting place in the team that took on Old Albanian in the fifth and final pre-season fixture and showed he has lost none of his trying prowess by running in the third try of seven in the match.

“I didn’t really know if I was going to be involved from the start of the season,” he said. “So for me being here and potentially being in the frame for selection for that game with Scottish is great.”

Chesters was an integral part of the team that won promotion from National South 1 and then National 1. Three seasons ago he ran in 70 tries and followed that up with 42 in the first season in National 1. Even before his accident he had already run in 29 tries in 23 matches before his season was cut short.

Against OAs it was Ealing’s back-three who ran in the first three tries; first off Chester’s fellow wing Owen Bruynseels dived to catch Ben Ward’s cross-kick to open the scoring and then fullback Andy Hall found a gap in the OAs defence to run in the second before Chesters got in on the act.

It was a clear sign that Ealing Trailfinders are going to be committed to the attacking, expansive game-plan that has served them well so far in their ascent up the leagues.

“We’re sticking to our word and that’s a good thing,” the 25-year-old said. “With the quality we’ve got in the back three, we love getting our hands on the ball. We always have in the last few seasons and it is a testament to the guys up front who are getting us that ball.”

There have been a lot of new faces at Vallis Way over the summer as Director of Rugby Mike Cudmore strengthened his squad for the season ahead.

While most people were sunning themselves on holiday the players were hard at work preparing for the new season after just a week off. The benefit was clear over pre-season as the team won all five of their seven fixtures, with the last two featuring seven tries apiece.

“It is gelling really well,” Chesters said. “We’ve had a lot of pre-season sessions, we’ve done a couple of socials and team-building exercises. Obviously it will take a bit longer than this 10-12 week period, but the guys have fitted in really well and bought into the ethos and the club is going to go from strength to strength.

“We are going into a league full of challenges and somewhere we’ve never been before. It was like that when we came up to National 1; it is going to be really exciting and we are just going to throw anything at it.” 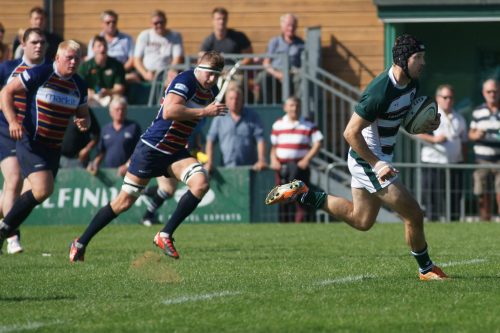 Chesters was back on the scoresheet on his return against OAs