On a bitterly cold and breezy day the Men’s 1sts faced a well-drilled Chinnor 2nd XV, which, along with Redingensians, have set the pace in Zoo Shield Division 3. 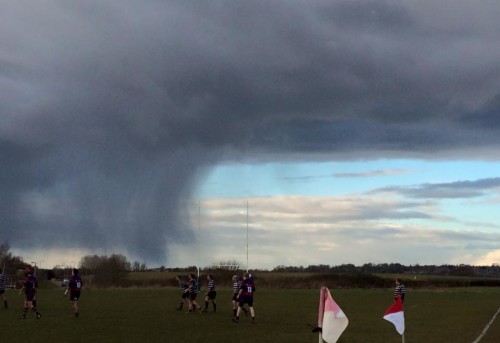 Playing into the wind in the first half, Ealing were soon on the back foot, where they were to remain for the whole of the first half-hour. After seven minutes Chinnor opened the scoring with a try on the left wing following one of many early penalties. Reduced to 14 men by a yellow card for coming in at the side after previously tackling the man without the ball, Ealing conceded an almost identical try by the Chinnor left wing, outpacing his would-be tacklers. At the quarter mark it was the turn of the right wing to get in on the act after a powerful forward drive. Chinnor’s outstanding No 10 nailed all three conversions despite the swirling wind.

With less than half an hour gone Chinnor moved into an unassailable 28-0 lead with an opportunistic try by an alert forward, and soon afterwards the ever-dangerous left wing skipped past attempted tackles and gave a scoring pass to the outside centre. An ignominious defeat looked in the offing when Chinnor stretched the lead to 42-0 with a hat-trick try by the No 11, again outpacing the Ealing defence. With half-time approaching the visitors finally started to play with authority. A penalty awarded 10 metres out was taken quickly,and inside centre Alex Hazell bulldozed his way over the line, with full back Steve Verma adding the extras.

Eight minutes into the second half, with the elements now favouring Ealing, Hazell picked a clever angle and scrum half Stef McCabe was on hand at the breakdown to pick up and dive over.

A vastly improved performance in the second period was rewarded by one of the best tries of the season. Outside centre Luca Townshend broke through the home defence on an angled run and French flanker Lucas Marty, in his last game for the club, was on his shoulder to feed Hazell, who returned the favour with a pass that put Marty in under the posts for a try converted by Verma. 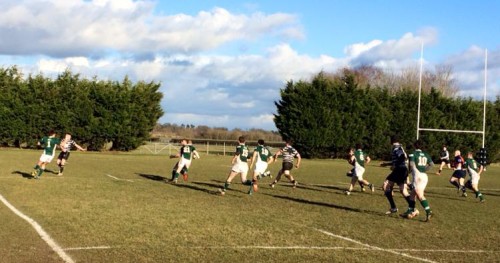 Hazell about to feed Marty

Just when it looked as though Ealing would complete the last 45 minutes without conceding, Chinnor added a seventh converted try through their forwards to end the match.

This Saturday, 28 February, sees the Men’s 1sts return to Vallis Way for the first of a prolonged run of home fixtures, with a game against East Grinstead.