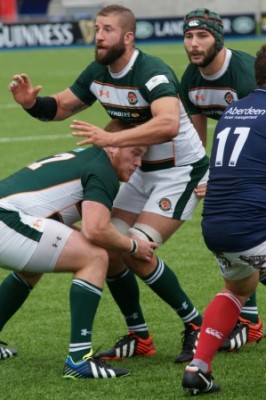 It has taken Gavin Curry a while to hit peak fitness, but now that he is nearing his fighting best, he is ready to help Ealing Trailfinders hit their stride in the Greene King IPA Championship for the last few weeks of the season, starting with Bedford Blues at home on Saturday.

The big second row has struggled this season with a number of injuries; abdominal, Achilles and groin, but he enjoyed 35 minutes off the bench in the second half against London Scottish and hopes to keep up that run for the last two months of the season.

“It wasn’t too bad,” he said. “I haven’t played at the sort of standard for a while, so I was blowing a bit when I came off the pitch, but it is just a case of getting used to it, so I should be ok from now on.

His appearance at the Athletic Ground was the 31-year-old’s first appearance since he came on in the second half in the 18-18 draw away to Cornish Pirates in late January.

The performance against the Exiles was in stark contrast to the draw at the Mennaye Field and despite an early try from Andrew Henderson and a later effort from the returning Billy Robinson, Scottish were in full control as they ran in six tries themselves.

“We’re disappointed, not with the loss, but with how we lost,” Curry said. “We didn’t really perform and apply what we’ve been doing in practice. The set-piece didn’t really work and we’ve improved a lot since the beginning of the season with the set-piece, but didn’t really keep that up from previous performances.”

When the teams met back in October in front of the Sky Sports television cameras it was a fiercely contested fixture in which Henderson and Morgan Thompson scored first half tries. After trailing 14-12 at half-time, Bedford then used the slope and wind to their advantage to win 31-14.

Both teams have well-founded reputations for liking to move the ball wide and with the pitches starting to firm up, the match gives the Ealing players the chance to get the loss to London Scots out of the system as soon as possible.

“It was pretty disappointing to be honest, but this week we want to get back on track,” Curry added. “Everyone is up for this weekend and it is a must win. I don’t think anyone is not going to bring a lot of intensity.

“Bedford and Ealing like to play open, running rugby so it will be quite a fast game on Saturday. We prefer that to playing on the boggy pitches we’ve had, so I think we’ll be a bit more comfortable come this week and use the style of play we want to apply. It will be a big game for all of us.”

Before and after that match there will be all the Six Nations matches shown on the big screen. England kick-off against Italy in Rome at 12.30 and will hope to create some eternal memories in the eternal city.

Then after Ealing’s match, Ireland take on France in Paris, aiming to claim their second Six Nations title of the professional era to send Brian O’Driscoll off into international retirement in fitting style.

There will be bacon sandwiches served from 11.00 and an all day barbecue to keep the hunger pangs under control, while the bar will be open and ready for action from the late morning on.