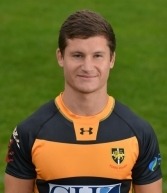 Ealing Trailfinders are delighted to announce that Luke Daniels has signed for the club for the 2014-15 season.

Daniels joins from Esher, where he has appeared as fly-half, fullback and wing for the past three seasons. He notched up 267 points last season as the Surrey side finished fifth in National 1and earned himself a place in The Rugby Paper’s National 1 dream team in the number 15 shirt.

“Luke’s running game will certainly excite the fans next season,” Director of Coaching Ben Ward said. “He has a good brain combined with electric pace and he is one to watch. On top of this he is a prolific goal kicker.”

The 22-year-old South African has also appeared for England Counties U20 and Surrey U20.