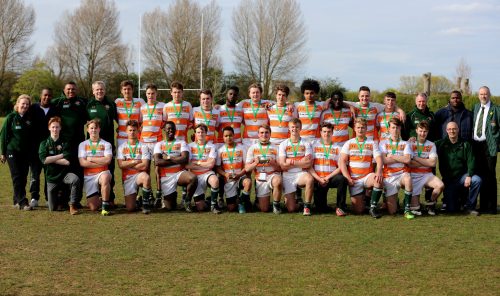 So the scene was set for the final and biggest game of the season. Cambridge, having just won the Eastern Counties Colts Cup looked like a team on a mission, Ealing going about their business as usual.

A nervy first ten minutes saw a number of handling errors from both sides but with Cambridge edging the possession and territory with good set piece work and solid work at the break down. Ealing however were looking sharp and dangerous every time they got the ball, they just needed to secure and keep more of it.

The first breakthrough came out of Cambridge pressure deep in the Ealing half. Ealing won the ball from a lineout and Josh Steadman broke up-field. The ball went through the backs hands wide to the left through Callum Jones, Matt Lacour and Nakyle Bennett-Dawkins. A swift break and some excellent work by Matt Lacour saw Nakyle held just short of the line but, Lewis Ellingham pounced to pick and go and place the ball over for the first score with Conor McPartlin adding the extras.

The game continued in the same vein. Cambridge very strong in set piece and breakdown, Ealing looking quick and sharp when they got possession. A kick placed deep into the Ealing 22 saw Cambridge catch and drive. This would prove to be a powerful weapon Cambridge would use effectively throughout the game. The result was strong work from the Cambridge forwards and they were rewarded with a try.

Again the pattern continued. Another break from Ealing secured a penalty just about in front of the Cambridge posts. Conor McPartlin placing the ball between them for the 3.

Cambridge still very strong came back. Ealing worked tirelessly in defence but penalties were starting to take their toll. Another kick deep into the Ealing 22 and another well worked try for Cambridge, this time converted.

Ealing were not to give up. Intelligent out of the hand kicking by Conor McPartlin at 10 gave good field position and with better work at the breakdown meant that Ealing were just starting to play. Then another break out of their half saw a penalty just on the Cambridge 10 metre line. It was late on in the first half and going in at half time a point up would be a blow for Cambridge. Conor McPartlin duly obliged, his kicking looking solid having not missed a chance so far.

The second half got underway with Ealing coming out of the blocks like a Greyhound. An immediate break from Ewan Jones saw good work on the floor and at the ruck. The ball came open to Funbi Osuntoki who continued the charge up-field. Again good work at the ruck and with quick ball the Cambridge defence was not quite in place. Josh Steadman at 9 spotted the gap and raced through it to run half the length of the pitch to touch down, Conor McPartlin with the extra 2.

Ealing continued to play at a faster tempo with pace all across the pitch and continued to cause Cambridge problems leading to another penalty from Conor.

At this point Cambridge were rattled. They are however a very good team and good teams keep going. They kept working their game and doing what they do well. Slowly they started pulling the second half around with continued excellent tight work. The catch and drive had become a real problem for Ealing and again through good forward pressure and hard running by the backs they got their reward, a converted try.

Ealing were now feeling the pressure with about 15 minutes to go and the game truly settled into its pattern. Cambridge continued with their fine set piece, driving maul and breakdown work, Ealing playing fast in the open spaces. It seemed it was now important to score next. Luckily for Ealing it was them. With more intelligent kicking and another fine break with pace saw them go hands from half way out. Ealing won a penalty  5 metres out and chose to run with it. Reon Joseph in support stepped up and with his strength and agility managed to get over the line. Another kick from Conor to add the 2 and secure his 100% record for the match.

Cambridge yet again showed their class and determination and came back with more of the same and again to be rewarded with a converted try.

The last 10 minutes for Ealing seemed like an hour. Cambridge pressed and pressed but the defensive wall that Ealing put up was impenetrable. Cambridge did come very very close a couple of times with Funbi repelling a Cambridge player from the try line back to the 5 metre line and then just a few minutes later Andrew Barton made a try saving tackle wide out and on the line with Josh Steadman following up only to see Cambridge knock on. From the resulting scrum Ealing were able to clear their line. Cambridge countered again with the ball making its way to the other side of the pitch where they tried hard to break the Ealing defence but were tackled into touch. The lineout was the last play of the game and all Ealing had to do was win it and kick to touch. The pressure was at its height. Matt Hodson threw another accurate ball, Ewan Jones went up and with the lineout secured the ball went from Josh Steadman to Conor McPartlin who put the ball into row Z and it was all over.

An absolute classic final contested between two very good teams with very different styles. It was just today Ealing came out on top.

Well done to all the players on both sides and best of luck to all the U18 players now moving on.

Thanks to the coaches John Lacey, Bill Miller and Karl Gibson.

And to the management Jerry Woolford and Annie Lyndon. 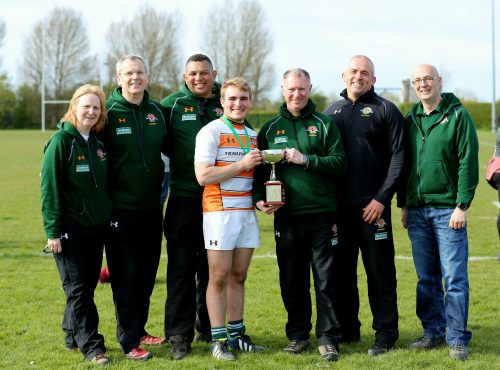 Anyone interested in helping sponsor the Ealing Academy next season, please contact the coaching team via the Contacts page or email jerrywoolford@gmail.com