One of the strongest Evergreens teams fielded in recent years donned the green jerseys on the newly renamed “Stadium Pitch” at Fortress Vallis under floodlights on a crisp Friday night. Early exchanges were pretty even as OIs showed they were not there just to make up the numbers, responding to early Ealing pressure with strong forward runs themselves. However, after about 10 minutes Vets debutant Leroy blasted over from a neat base of the scrum pick-up followed by a rare Dave Steene conversion. OIs responded well with a break from a quick tap penalty allowing their lightening quick centre to score a converted try. With the game well poised at 7-7 the early loss of Captain Jake could have been an Achilles’ heel moment but he was admirably replaced by the whippet-like John Ronane, with newly appointed vice-captain Jacko stepping into the General’s slippers with ease.

Our second scoring debutante of the night, the right Reverend Tim, drove over with his new flock of unrepentant forwards into the left hand corner to make it 12-7 and, despite Pup dropping the ball over the line (not seeing the defence had kept up with him), the Evergreens stretched their lead soon after. Tristan bundled himself over the line from a catch and drive at a line out stretching the lead to ten points. Effe showed his power has not left him in the new season when he bounced an OIs defender to score another unconverted try, that the aforementioned second row (Rev) deemed eminently kickable; he was soon substituted for a “breather” by the match day manager Green, seen pacing up and down the touchline like Ferguson in his heyday (ahem). 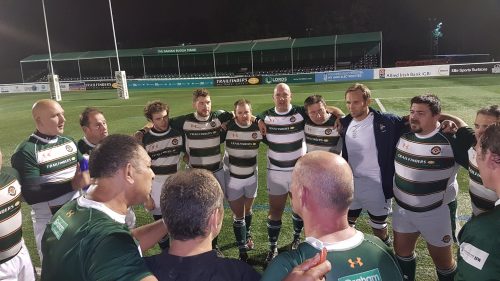 The half time talk was centred around simplifying the game plan, focusing on reducing unforced errors to try to stretch and tire OIs and rotating our bench, which was patiently waiting to get a run. The second half scoring was opened with a moment of pure class as Leroy fed Tristan in a tight space necessitating a straight, spinning exorcet-like reverse pass to Jez which the forwards dogged to the try line; Steenie could not miss this one: 29-7. After a jinxing run from the kick-off Beck Pup slipped to Leroy for his second score, soon followed by Jacko (not dropping the ball over the line or giving it to the opposition) scoring after a free flowing backs move in the left corner: 43-7.

OIs, down but never out in this match, then showed their resilience by scoring a well deserved consolation try by applying heavy pressure on the Evergreens line using the penalties justifiably awarded for not rolling away at the breakdown. However, Leroy scored soon after, from a great hook against the head (Fabio/McSweeny*), leading to the workman (=Steenie) blaming his tools (= fancy orange boots) for another con miss. Jacko swerved for the final nail in the OIs coffin, hammered home by Steenie to make it 55-14 at the final whistle.

Great start to the league season boys; building on the comeback at Barnes with free flowing rugby, depth in the squad and (Rahim claims) one of the finest post match meals at Vallis of beef pie, washed down with a rarely experienced Chairman’s purchased ale or two. Next game under flood lights on Friday 11th November versus Wasps…so are you a vacillating, would-be Evergreen reading this match report? Get emailing the club and come on board; we are on our way. 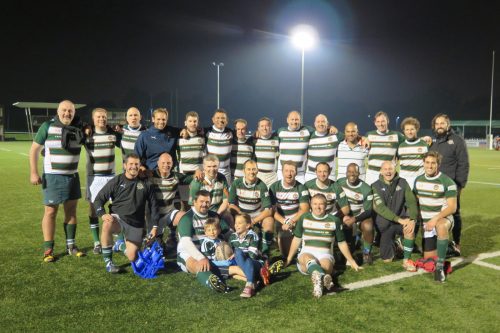