Last weekend Ealing Men’s 1st XV slipped to their fourth defeat in Zoo Shield Division 2, a league largely containing the second strings of National 2 and 3 clubs, but put in a promising performance and led for much of the game before eventually running out of steam and conceding late tries.

Playing into a stiff breeze, Ealing immediately came under pressure from the kick-off but defended stoutly and steadily moved upfield. With 8 minutes on the clock they took the lead after going through several phases, with strong running by debutant Andrea Costa and Charles Mansell in the forwards and another debutant, Nico Galvan, at outside centre. Flanker Alex Kritikos probed the line but was held up, and wing Abdou Traore was on hand to pick up and score. Influential second row Sean Kennett was injured during the build-up to the try and retired from the field to be ably replaced by Jonathan McKeogh. The visitors from Bristol responded almost immediately when smooth passing along the back line created an overlap. Ealing full back Steve Verma felled his opposite number with a typically emphatic tackle, but a well timed offload to the left wing left him with an easy run to the line.

Neither side dominated the next 20 minutes, although Clifton looked dangerous on the break, particularly in the backs. Ealing’s forwards, who battled hard throughout, created the next score through a series of pick-and-gos, with flanker Ben Mitchell touching down. Verma converted to take the lead to 12-7, which was reduced on the stoke of half-time with a try by the Clifton open-side flanker, collecting the loose ball as the referee played advantage following a late tackle on the left wing.

With the benefit of the breeze in the second period, Ealing were well placed to push on for victory, but the good energy levels shown in the first half started to decline against well dried and fit opposition. Soon after the resumption, the visitors were reduced to 14 men for a high tackle, but crucially the penalty failed to find touch deep in Clifton territory and a swift counter-attack ended with the No 7 collecting his second try. Ealing were by no means finished, however, restoring their lead almost immediately with captain and No 8 John Worthington touching down after a typical rampaging run by prop Patrizio Bancher. From an uncontested scrum necessitated by injury to a Clifton prop and a yellow card issued to his replacement, an Ealing clearance kick was charged down, and from the resultant scrum to the visitors the left wing side-stepped over. Despite a second yellow, again for a high tackle, Clifton scored again, through the full-back from turnover ball, moving into a 29-19 lead. With 10 minutes left on the clock Ealing were by means out of the contest, but the game was put beyond doubt by a powerful angled run by the replacement right wing.

The men in green and white were not finished, however, securing a bonus point with a fourth try through prop Tom Szyszko, forcing his way over from short range, with replacement scrum half Jack Hissey notching the conversion. 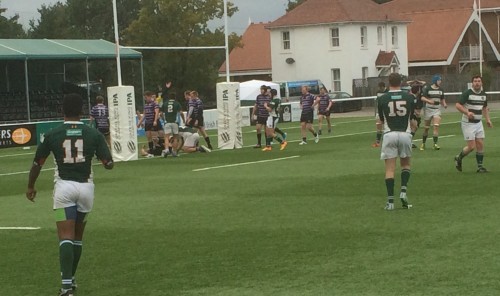 Another Ealing score would have secured a second bonus point, but Clifton put a gloss on the score with slick inter-passing resulting in a try on the right wing and the fly half speeding away to the line as the home side conceded a turnover.

Today the Men’s 1sts make the short trip to London Irish Amateurs, before taking a week off from league action for the World Cup Final.