The Men’s 1sts got their 2016-17 Zoo Shield Division 2 campaign off to a winning start, holding out against a late onslaught to record a narrow victory against a side they had lost to in the opening fixture of last season. 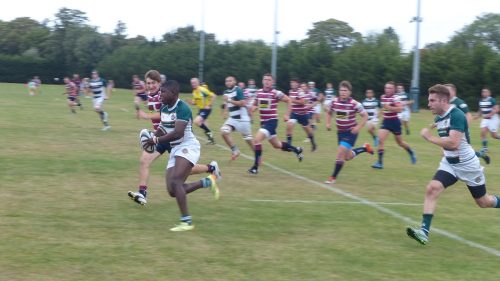 In a home game played at Wasps Amateurs’ Twyford Avenue ground because of cricket commitments at Vallis Way, Ealing quickly settled into a good rhythm, winning good line-out possession and looking solid in the set scrums, with Sean Kennett making a welcome return after missing most of last season with a shoulder injury. Exploiting a slight following wind, fly-half Max McMinn kicked a penalty deep into Shelford territory, and a second awarded soon afterwards enabled him to open the team’s league account for the season with an easy three-pointer. On 10 minutes, another penalty by McMinn just failed to find touch, and the visiting right wing gathered the ball. However, his pass was ill-directed and was eagerly intercepted by Ealing left wing Rasaan Samms, who sped away to touch down wide out. Crucially, as it later turned out, McMinns was able to add two extra points with a sweetly struck conversion. With the advantage of the breeze, the men from Vallis Way continued to dominate proceedings and came close to a second score when a pass went to ground just short of the try line after slick passing among the forwards. Just before the half-hour mark, the pressure finally told when Shelford were penalised for offside and McMinn added another three points. 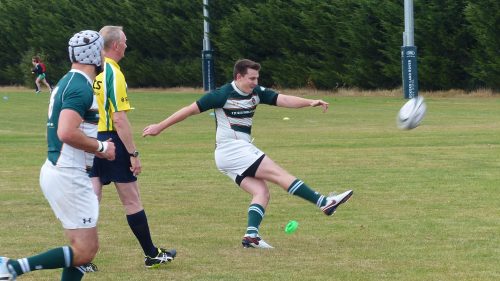 Sitting on a 13 point lead and looking easily the more incisive, Ealing unfortunately lost concentration for a period, conceding a try out wide on the right from a quickly taken penalty and within 3 minutes a second on the left wing, with the first of the two scores well converted, leaving the score poised at 13-12 at the break.

Ealing went onto the attack from the restart and were rewarded with a fine score by tight-head prop Kadeem Collins, who took the shortest route possible to the try line. The visitors reduced the deficit with a penalty, but the lead was soon afterwards extended to 25-15. No 8 Stuart Miller broke from a scrum and fed Louis Walker, whose try out wide on the left was well converted by McMinn. When Samms added his second and the team’s fourth to secure a bonus point, a win for Ealing looked assured, but as the weather conditions deteriorated the men from Cambridgeshire showed that they were more than capable of overcoming the deficit. Full-back Steve Verma twice held up Shelford attackers on the try line, but with 57 minutes on the clock the pressure finally told with an unconverted try. Ten minutes later Shelford were again held up on the line, but the referee went back for a penalty, the ball was worked right and the inside centre squeezed over just inside the touch line. With 7 minutes remaining the gap was reduced to two points when a Shelford forward scored after a period of intense pressure, diving over a pile of bodies. To the great relief of Ealing supporters the conversion missed its target, setting up a nail-biting conclusion to the game in which the green-and-whites held out in the face of driving rain for a satisfying win.

Next Saturday, 10 September, the Men’s 1sts face a stern test at home to Richmond Saxons.