In a game that began in rain and finished in warm sunshine, the Men’s 1sts recorded their second win of the new Zoo Shield Division 2 season with a six-try victory over league newcomers Southend, who themselves already have two wins under their belt.

It was the visitors from Essex who made the stronger start, forcing Ealing onto the back foot for the opening five minutes. While Southend held most of the territory, the Ealing backs were looking dangerous on the counter-attack, with Andre Adeleke looking particularly lively on the left wing. With 10 minutes gone it was Adeleke who intercepted a loose pass as Southend probed again and sped away for a 60-metre try. Fly-half Max McMinn converted from in front of the sticks.

The Ealing forwards then started to take control, showing increasing superiority in the set scrum, and won a penalty for hands in the scrum, but then failed to capitalise by losing their own line-out in a dangerous position. Mid-way through the first period scrum-half Tristan McGee snaffled up the ball as the Southend scrum back-pedalled again and launched an attack down the right wing, leading to a penalty for off-side, which McMinn turned into three points. Soon afterwards the visitors reduced the deficit with a try in the corner by one of their forwards following smooth passing along the back line, well converted.

Adeleke was in action again on the half-hour mark, kicking ahead past the last line of defence but appeared to be late-tackled before he could collect. Soon afterwards McMinn missed narrowly with another penalty attempt following strong carrying by the forwards. With half-time looming, Ealing won a crucial strike against the head 30 metres from the opposition line. No 8 Alfie Hill picked up at the base of the scrum and powered over, leaving the half-time score at 15-7.

Ealing began the second period strongly with Adeleke setting the tone by athletically gathering the ball from McMinn’s re-start kick, and it was McMinn who scored his side’s third try with a mazy run to the line which he converted to make the score 22-7. The home forwards continued to dominate with a series of pick-and-gos, and the pressure told when Kadeem Collins, normally a prop but playing at lock for the day, scored with a typically powerful run straight to the line, securing the four-try bonus point. 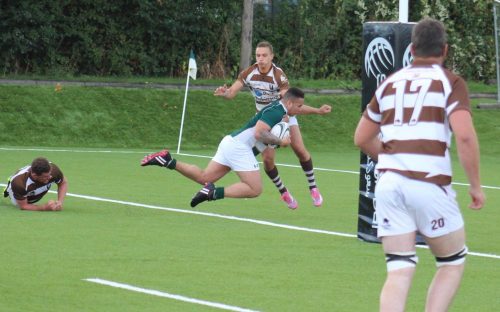 Victory now looked assured, but Southend were next to score when missed tackles allowed one of their forwards to score close to the left touch line.

The hosts finished strongly, with a fine try by Steve Verma, put into space by McMinn, and a second barnstorming try by Hill.

A greatly improved performance by Ealing, who were perhaps slightly flattered by the final score but showed an encouraging ability to turn pressure into points at key moments.

This Saturday (8 October) the Men’s 1sts face a tough fixture away to Old Albanian 2nds.