After a 3-week layoff, the Men’s 1sts were looking forward to the chance to avenge a loss away to Shelford in the first Zoo Shield game of the season, but it was not to be as Shelford cried off. Fortunately a replacement fixture against Hammersmith and Fulham was found, and Ealing proceeded to post a morale-boosting nine-try win against their West London neighbours, who nevertheless competed well throughout.

Ealing went straight onto the attack from the kickoff and were rewarded with a try with just three minutes on the clock, scored by centre Luca Townshend. The home team continued to dominate possession and the breakdown area and moved further ahead a quarter of an hour into the game, with Australian lock Ben Mitchell galloping home after being put into space by Townshend. 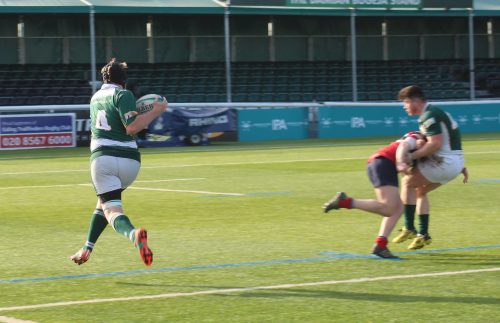 Four minute later the irrepressible tight-head prop Patrizio Bancher barged his way over near the posts, with No 10 Joe Smith adding the extras. On the half-hour mark Smith’s penalty to touch fell short, but chaos in the defence enabled Abdou Traore to hack on, the loose ball was gathered by an Ealing player and centre Brenton Gibson became the second Australian to score.

Ealing were urged by coach Nick Lambert to maintain their intensity in the second half, and a fifth try ensued two minutes after the break, another short-range effort by Bancher, converted by Smith. Next on the scoring sheet was full-back Alasdair Stevens, with Smith again adding the conversion. A few minutes later replacement prop Tom Szyszko made ground down the right-hand touchline with a powerful straight run, leaving would-be tacklers strewn behind him, the ball was quickly recycled from the breakdown and hooker Andrea Costa finished off. Townshend then scored his second of the day, with Alex Gillespie converting, and fluent play by the back line led to another try for Stevens. With Ealing reduced to 14 men as the game drew to a close, H&F enjoyed more possession and it was they who notched the last score of the day.

This Saturday, 12 March, the Men’s 1sts face a much sterner test in the shape of Bishops Stortford 2nd XV, who lie second in the table with games in hand and have lost just once in 20 games.