Ealing Trailfinders selected a strong side for their latest fixture, this time taking on the Combined Services U23 squad. Having already recorded impressive victories against the Army Academy Development squad and the Navy Academy U23s, this was sure to be the biggest test yet.

Championship squad players Will Magie (USA U20) skippered the side with second row George Sandford (England U18) leading the pack. Forwards Jack Pattinson and Jordan Saunders (both England Students), wing Sam Rendle and Cody Blackhurst brought great experience to the side.

With a rare break in the rain the facilities at Old Merchant Tailors RFC were superb and provided a surface to encourage running rugby and this young Ealing side showed from the first minute they were there to play.  A quickly taken line out in the first minute saw the ball spread to the far wing where winger Rendle showed great pace to take the attack deep into the Combined Services half. Scrum half Ben Lloyd set the standard for the day demanding quick ball from the Ealing pack and providing quality service for skipper Will Magie, good continuity from backs and fowards created the space for Magie to break through and score the first try which he also converted. 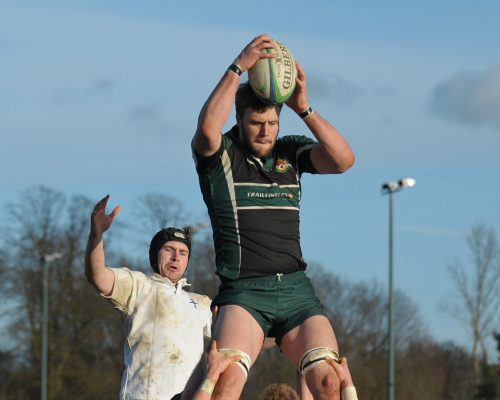 Development squad No8 Sam Lunnon was the next to benefit from a Magie break when he was rewarded for a great support line with a pass that saw him sprint in from 25m. Winger Chris Fagan who was busy all day and hungry for work was next to score as the intensity of the Trailfinders defence caused problems for the young servicemen. A dominant half was finished off with a try for Will Hague-Bundy, on for centre Louis Flynn,

Combined Services made wholesale changes for the second half and posed a different set of problems for the team, playing a more direct game and asking questions of our midfield defence. But it was impressive winger Chris Fagan who widened the gap to 29-0 before CS U23 finally got on the score board with a strong run through the midfield.

An impressive line out performance from Cody Blackhurst, Sam Lunnon and George Saunders along with strong performances from props Jordan Saunders, Charlie Burman and Pat Nash meant the set piece provided a good platform for us to show just what an exciting brand of Rugby Ealing Trailfinders play.

A hugely enjoyable day for the young players from across 3 squads and another fantastic way to show our appreciation and support for our armed forces, a partnership we hope can continue to grow in the coming years.