If you want to see if Phil Chesters is as quick between the wickets as he is racing towards the try-line, or whether Morgan Thompson’s bowling is as quick and true as his passing or whether Steve Pape is as powerful with a cricket bat as he is charging at an opposition’s pack, then head down to Vallis Way on Wednesday 18 June.

It will be the first chance for Ealing Trailfinders fans to come and meet the new players and catch up with those who have signed on for the 2014-15 season. The bar will be open and a barbeque on the go to provide refreshment for those on and off the field.

The first ball is due to be fizzed down the wicket at 18.00, so come down and cheer on both teams. 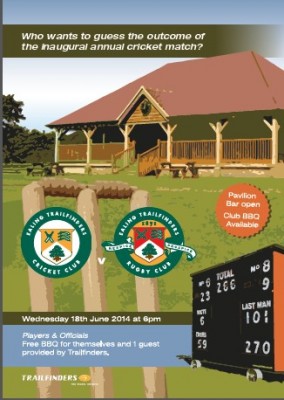