Club and Referees Section stalwart Marek Kostka passed away on Saturday 8th November 2016. The following tribute is from Pete Paterson. 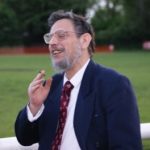 The great thing about Marek was that he did his coaching with a lightness of touch, but in a way that left you in no doubt about what you needed to work on. I remember being told after one game between Ealing and Richmond U15s that I had had a bad day at the office but that it had been a great game to watch. This was so typical of Marek; he wasn’t going to mince his words, but he wasn’t going to leave you feeling down either. I have much to be grateful to him for: not only his support for the development of the Referee Section, but also for many years of enjoyment refereeing in the London Society.

It is a mark of the man that so many people on social media are writing to say how much he helped them and how much of an influence and a gentleman he was. I have included a few examples below:

“RIP Sir. Would never have got this far into rugby reffing without your guidance. A true legend and gentleman!”

“A very sad day, and a great loss for the Society! Marek was a fantastic assessor.”

“RIP: it is really a shock! He was a fantastic Gentleman on and off the field; we all will miss him.”

“A man who had time for everyone, and had such a great enthusiasm for refereeing and rugby.”

“Whether we were winning or losing, I will always remember Marek having an encouraging word to say about the style of rugby being played.”

“Marek was a genuine gentleman, always helping the new referees and always giving encouragement to others.”

“I used to feel chuffed to report back to him on how I was getting on, because he saw me through from start to where I am now. He has a pair of shoes that will be very difficult to fill.”

As the backbone of the Ealing Trailfinders Referee Section, Marek also extended his services to other clubs and has been acting as the person to go to for referees for youth games in the area for some years. Ruislip and Wasps have much to thank him for. Marek would describe this as enlightened self-interest, arguing that he was getting training games for the referees under his tutelage. The rest of us understood that he was selflessly helping those referees, and those clubs.

When Ealing Trailfinders suggested that the Referee Section could award its own club caps for services to refereeing – coincidentally, and much to its credit, the only club in the country to do so thus far – it was easy to decide who would be awarded the first cap. All referee caps are numbered and No. 1 was awarded to Marek, an award greeted with a standing ovation by all those present, and by the biggest roar imaginable from the whole Jades team, which Marek had supported from the outset. Marek was absolutely shocked to receive the award; so typical of his self-effacing nature.

The club has lost a great servant, but much more importantly, Donia has lost her husband, and their boys, Bo and Stasio, have lost their father. Donia has asked me to include these words:

“Donia, Bo and Stasio would like to thank everyone for all their uplifting support and thoughts at this time. We would like to invite you to a celebration of Marek’s life at the funeral and afterwards. Details to follow.”

Respect, Sir! You have been a true gentleman and a legend in your many spheres of influence.