Friday night and we were under the lights at Vallis Way again. Once again Evergreens managed to sneak home, this time against a committed Quins vets team whose never say die attitude had them within a whisker of a win. Ealing started strongly with early pressure leading to a penalty just inside the Quins half. Both opposition and referee were surprised when returning captain Jake Usher elected to let Damien Connolly kick for the posts, but Carter-esque he slotted it between the posts for a 3 point lead. Soon after he thundered after a kick and surprised the subsequently heavily admonished Quins winger by pouncing on the ball for a great individual try. Quins battled hard, scrummaged really effectively and kicked out of hand well once they got into their stride but once again the Evergreens kicking game worked well with Justin Green sending a long flat punt, which was touched down into the dead-ball area via the flailing hands of a Quins back that led to a home team 5 yard scrum. A blindside drive from Terry Thompson with quickly recycled ball allowed Eddie Beck to add to his impressive season’s try haul (if only his converting were as prolific); 13-0 halftime. 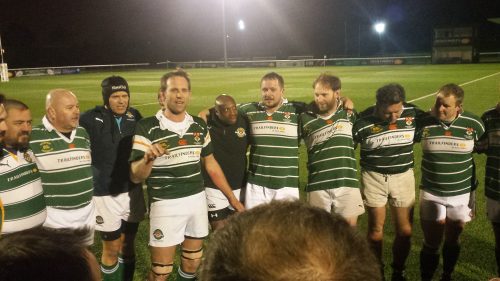 Quins came out of the blocks hard in the second half and executed a clear game plan to play the dog and rhino ball well resulting in an early (unconverted) try that was immediately matched by another from Beck carrying the ball well in the final quarter of the pitch. Relentless continued forward pressure from Quins and some crafty kicking from their 10 led to another score mid-way through the second half. However, rotating the bench using Carlin, Ronan and others from his wheelchair and crutches on the sideline BOF was able to keep the Evergreens fresh and resilient to further forward onslaughts until the final minute of the game when Quins scored another unconverted try. They will rue their conversion misses and slow start but the Evergreens were celebrating a fine victory against a quality side and rising to the dizzy heights of the upper third of the Surrey Vets League table. One more match to go and it’s our own cup final against Richmond Heavies on Saturday 9th April – bring it on! 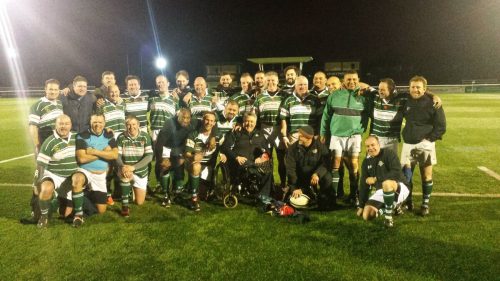