“Cavalry is useful before, during and after the battle,” wrote Napoleon, and he stressed the need for audacity in its employment and careful training to achieve true discipline. This 19th Century adage as true today as when the little fellow penned it all those centuries ago.

OPs had suffered on the Friday evening journey and arrived a little disarrayed. However, the game started with us going 17-0 down; two converted tries (first-up tackles gents) and a neat drop goal from the OP’s 10. Despite being a little shell shocked we rallied and realised we needed to keep the ball in the forwards a bit more to create space for the gasmen on display – Whitehead and Thompson. To this end the appearance of cavalry #1 in the form of minis Dad Serge Betsen aided and abetted our recovery, not only by his try scoring, but of course his defence was outstanding; tackling then stripping the ball on a number of occasions – 17-10 at halftime. However, highlight of the first half was a covering tackle on the jinky OPs number 9 by a rampant Rahim Virani, undoubtedly saving a try.

After a focused halftime huddle with a few encouraging comments from the manager, as well as a group determination to push on from that second quarter performance we struck back immediately with 17 unanswered points, including a very non Chris Rob”un”shaw decision by stand-in chief Green to kick a penalty where a line out in the corner could have been taken. Defence can win games too though as exemplified by MOM Steve Nethercote, returning to the pitch to win valuable line out ball despite having sustained a dead leg. History reports that Bonaparte fled before Austrian cavalry by climbing over a wall and lost his boot in the process. Flying in late (plane not tackle) it was Beck’s leading of the line (another try) and personal defensive display that made him the very incarnation of that kind of Habsburg cavalryman. 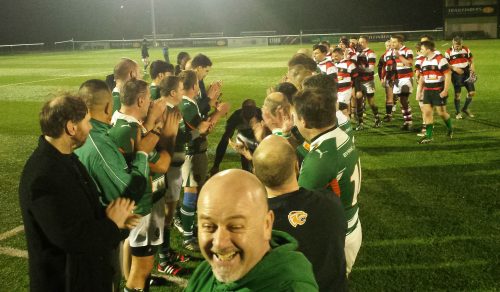 Although our tiring in the final 10 minutes allowed their scrumhalf to sneak through again, despite a monster cover tackle from Mark Rutherford, to assist a converted try we managed to close out the final 4 minutes with some controlled forward play & occasional moment of panic…full time 27-24 to us…just need our skipper to be available for the next two games so we do not rely on late appearing men on horses. We are in a good league position now and have had a great run of performances (7 & 4 for the season so far) with two to go, so step up for this Friday versus ‘Quins then 9th April for Heavies.