Former Ealing Trailfinders and Ireland age-grade player Paddy Gill returned to the club over the summer as a new skills coach. Here the scrum-half provides an insight into what he is doing to help ensure the team hit the ground running when the season starts in September.

We are coming to the six-week point of pre-season and the players have been busy developing their individual skills. These skills whether it is passing, kicking or throwing will in turn contribute to the team being able to play the wide expansive game plan Ealing Trailfinders are known for.

As Skills Coach it is my responsibility to identify areas in which each player may need to develop to enhance their performance, and focus specific time on these. The acquisition of these highlighted skills takes time and to get the desired outcome a coach needs to plan effectively and in this case, a six-week plan for the team was put into effect. Working in small groups for the first two weeks allowed time to access each player’s strengths and weaknesses.

This led to larger groups being established where individuals had the chance to train in similar skill level groups, which has be found to help build confidence within players and having signed many new players in the off season, it was vital for players to become accustom to the working ways of others.

The idea of quality players not being able to read their teammates movements may sound exaggerated, but this is the issues that arose. To develop player relationships, we tended to focus on similar drills which allowed players to gain understanding through game specific scenarios, such as overload attack and handling sets. 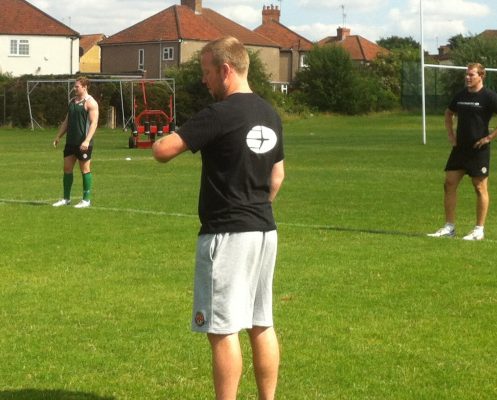 Once the bonds had been formed we changed focus, using timed handling sets to put the players under physical and mental pressures. This forces player’s to think quickly and perform the skills learnt whilst in a high pressure environment, which research suggests enhances player skill development. High pressure training allows the players to also push each other and strive for better outcomes with every set, and with the club looking for promotion, is exactly the type of animal we are looking for.

Following the six week block, there will be a shift in focus, with shorter training sessions but with levels of intensity lifted with high levels of success expected from not only myself, but the players themselves. This will lead nicely into the pre-season games and concurrently the first league game of the year. Throughout the season there will also be a weekly award to the “Skillman of the week”, which celebrates the best individual piece of brilliance in a training session or game.

This is shown during the Tuesday evening team meal, and the player who is selected, signs a baseball bat and whoever has signed the bat the most by the end of the season gets to keep it. Hopefully it will encourage the players to stretch themselves to find new skills that they can use for the benefit of the team once the season starts.