Kean Marden reports from the heath… 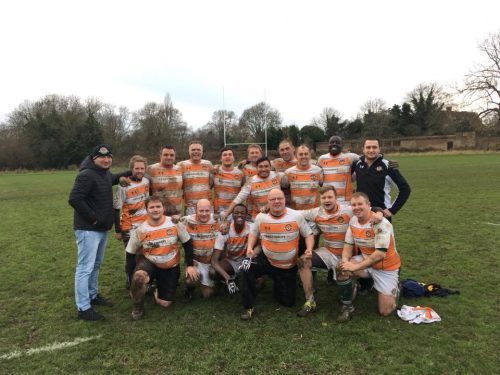 Six of us aimlessly lobbed a ball around 30 minutes before kick-off with the shouts of Hampstead’s 20+ strong squad running through drills ringing in our ears. The opposition’s enthusiasm was understandable: they had beaten top-of-the-table Ickenham the previous weekend, their cancelled 2nd team fixture had bolstered their roster, and Ealing Exiles could barely scrape a team together.

Fortunately for us, the referee had become waylaid in the mean streets of Hampstead, or perhaps distracted elsewhere on the heath, so upon his arrival the Exiles were up to 13. Hampstead’s squad was sufficiently large that they kindly lent us a 60 year old tight-head called the Colonel to allow contested scrums (and hence their eight man scrum to smash our seven all afternoon). The Colonel was enthusiastic (presumably because he wanted to play rugby and hadn’t made the Hampstead bench) but informed us that his heart rate had to remain below 180. A sexagenarian equivalent of the Speed movie, it seems.

14-man Ealing started brightly with Stef collecting the kick-off and side-stepping several tackles before being hauled down just shy of the 22 and narrowly failing to off-load to Kean. This was the last time Ealing would visit the Hampstead half for 20-25 minutes. The opposition had their tails up: defensive line speed pressured Ealing’s exit strategy from the 22 on several occasions; and they moved the ball wide frequently to exploit numerical advantage. However, resolute tackling by Ben and Alex in the centres, dogged defence of our line, and the growing realisation that Ealing’s seven-man scrum was competitive enough to shut out push-over attempts, meant that Hampstead’s opening try emerged only after a 20 minute arm-wrestle.

Although this pattern was sustained for another 10 minutes, Ealing’s makeshift 14 were starting to gel, gain the upper hand at the breakdown and provide the backs with a more solid attacking platform. On the 30 minute mark, Alex burst through the Hampstead centres, Ealing recycled, and Ben went under the posts to tie the match. This clearly unsettled Hampstead, and Ealing ended the half with growing confidence.

The second half was characterised by first phase control, collective discipline, a well-executed game-plan, Ben’s composed kicking out of hand, and Szyszko’s destructive running. The Colonel’s speedo had hit 180 but Luis had arrived in time for the second half and Ealing started with urgency in the knowledge that an early score could be decisive. Our first phase game was in the ascendancy (our scrum was now driving Hampstead off the ball, Dan’s line-out throws were accurate, and Steve Richards was as reliable as ever), 9 and 10 were linking well, and a relentless wave of rhinos pummelled Hampstead from ruck to ruck.

Eventually Hampstead succumbed to the barrage. First Szyszko went over, then Keir. Hampstead responded with a well-executed maul from a 5-metre lineout which brought the match to within one score.

However, Ealing maintained composure and delivered a brutal 10 minute passage of destructive line breaks led by Szyszko, Gianni and Dan. Szyszko’s second try smashed the posts and, after side-stepping the full back, his hat trick closed out a memorable afternoon on the heath.

Proudly placing the Exiles 2nd in the league, one point below the leaders.. 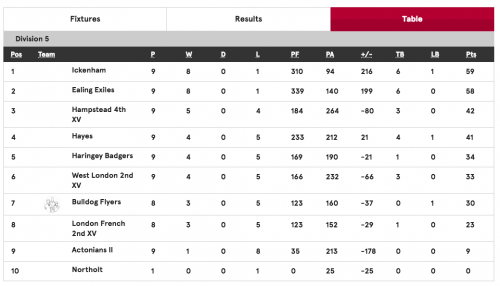