The Ealing Exiles is a team that continues to focus on the finer Arts of Coarse Rugby. The Exiles lay claim to being Ealing’s most serious social rugby team. Any team which does not have a mandatory half pint of pre-match Guinness must take their entry out of the ballot for this recognition!

However, on the pitch the Exiles take things seriously too and this season the team competes in Middlesex Merit Table Division Five and, when not involved in league fixtures, they rarely spend a weekend without lacing up the boots to do battle, on a friendly basis, with whomsoever steps up to the challenge. 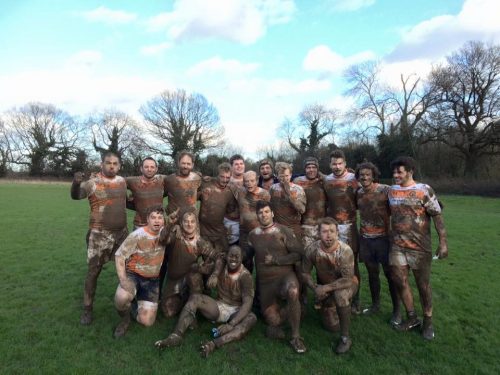 Most Exiles do not train due to laziness, living a great distance from Ealing (e.g. Barry, the captain, resides in Newbury) or other commitments. Players are allowed to train, but not expected to admit to doing so. Fitness is a matter for personal discipline and to be encouraged. 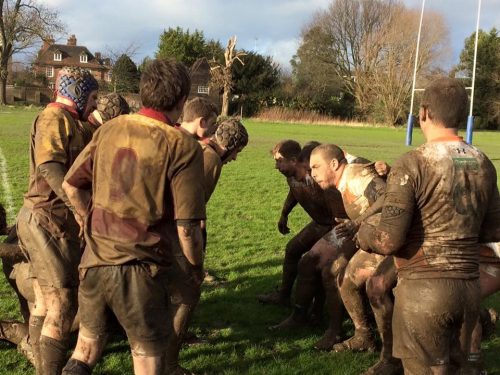 This laissez faire attitude may have had something to do with a disappointing run of defeats in MMT5 this season. However the team has stuck with it and the recent defeats have been closely fought. And then, BINGO! Last Saturday the Exiles delivered an emphatic away league win 49 -5 in the swamp that Hampstead call their home pitch.

The Exiles traditionally perform best in mud, maelstrom and deep into the season so Dave MacSweeney’s excitement upon viewing Hampstead’s partially submerged pitch was understandable. These weren’t the conditions for flamboyant rugby but the backs were eager to test the gain line, with some noticeable and unselfish line breaks from Will Shepherd, and elusive running from the centres and wingers. However, it was the team’s structure, discipline and support that made the difference. Some Exiles had accidentally attended training earlier in the season so forward pods were well executed, players were quick to the breakdown and they varied the attack right from the kick off when the Exiles scored after working through multiple phases. By the end of the match a resilient Hampstead team had double the tackle count.

No-one can recall how many tries were scored or by whom. In truth it doesn’t matter because the entire squad contributed. This win wasn’t fashioned on Saturday. A team that kept losing, remained positive and worked hard to improve has ground it out over several months.

This places the Exiles one place off the bottom but the momentum is now most definitely with the team.