Stef McCabe reports from White Hart Lane.
So the opposition turned up with 12 players, short of a front row player.  Barry stepped in to help out and played very well, he even went the full 80 minutes and also claimed man of the match for the opposition!
Mr Marden started the match for the opposition also. As always he put in some hard yards and played very well too. He re-joined exiles for the second half.
I suspected since they didn’t turn up with a front row, irrelevant of us lending players, they would have needed to start the match with 14 players, which they did.
So we had a very short warm up but what we put into the warm up was really pleasing and that got us off to a good start.  We were two tries up before they managed to get their first score.  We had a very good scrum and pushed them off their own ball a few times. Was an absolute pleasure playing at 9 with the opposition scrum going backwards, allowed us to put a heap of pressure on their 8, 9 and 10 and stopped them from utilizing their backs.
The second half saw Kean swap with Fabio in order that the opposition were able to continue to contest the scrum. It was nice to have a contested scrum as half the games i have played in so far this season have gone uncontested at some point. They also lost a player or two at half time so Luis ended up with the oppo as well as Luke – 4 of our players at the end of the match!
Our two new fella’s Ben and Keir played really well. It shows that they have been down to training as their positional play was really good. Ben hit some really good lines off our 10, made some good breaks and even got a try.  Keir was always looking for the offloads and positioned himself well to crash up a rhino ball.
At the end of the day we ended up winning by 7 tries to 4.  Final score was 43 points to 22.
Was a really good day out. My wife was even impressed by the quality of rugby! 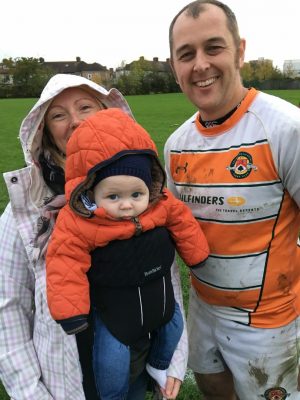