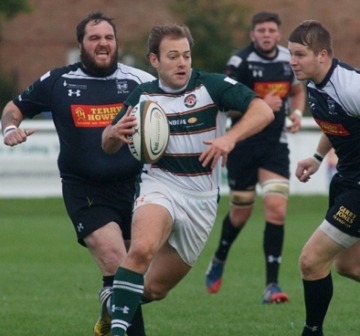 Andrew Henderson and Morgan Thompson will be out to repeat their try-scoring heroics against Bedford Blues in the Greene King IPA Championship on Saturday.

The pair were Ealing’s try-scorers earlier in the season at Goldington Road, when Bedford fought back from trailing at half-time to win 31-14. It meant they had the distinction of becoming the first Ealing players to score ties in front of the Sky Sports cameras, who were broadcasting the match.

Henderson was also on the scoresheet against a week ago against London Scottish and he will again start at fullback. He is joined in the back-three by Chris Kinloch by Ealing’s leading try-scorer Phil Chesters, who has scored eight in the league.

Thompson will link-up with Ben Ward in the half-backs, while Tom Wheatcroft holds onto his place in the centres, alongside Ronnie McLean.

In the pack TJ Anderson continues as captain in a back-row with Ed Siggery and Adam Preocanin. Gavin Curry returns to the engine room with Steve Pape, while Ryan Storer, Max Crumpton and Conor Carey make up the front row.

Before and after that match there will be all the Six Nations matches shown on the big screen. England kick-off against Italy in Rome at 12.30 and will hope to create some eternal memories in the eternal city.

Then after Ealing’s match, Ireland take on France in Paris, aiming to claim their second Six Nations title of the professional era to send Brian O’Driscoll off into international retirement in fitting style.

There will be bacon sandwiches served from 11.00 and an all day barbecue to keep the hunger pangs under control, while the bar will be open and ready for action from the late morning on.