A scintillating first-half display in which they outclassed a side that won 18 out of 22 in last season’s Zoo Shield 2 saw Ealing top the table after the opening round of fixtures. With several players making their Men’s 1sts debut, the team gelled remarkably quickly, and made an immediate statement of intent. From the kick-off, prop Kadeem Collins set off on a barnstorming run straight into the heart of the home defence. When he was finally hauled down, scrum-half Josh Steadman picked up and, spotting a gap, accelerated to score wide out on the right with less than a minute gone.

The visitors maintained a high level of intensity and self-belief, and extended their lead after 12 minutes. Fly half Harry Vidler kicked deep into Hertford territory, the Ealing forwards were up quickly to seize possession and after several incisive runs by the back line it was flanker Will Day who touched down for a try converted by Vidler.

Hertford’s main strength was in the set-pieces, and they reduced the deficit four minutes later with a try by one of their props after the visitors had been penalised for offside at a retreating scrum.  Ealing put this setback behind them half-way through the first half when a quick pass by Steadman put wing Chris Rose into space to score wide out on the right, Vidler adding the extras. The first bonus point of the season was secured with just 35 minutes on the clock. Hertford were awarded a penalty for hands in the scrum, but the attempted kick to touch was horribly mis-hit, and Steadman volleyed, skilfully gathered and sped away for a try that effectively ended the contest. In the last play of the half, a Hertford kick was collected by debutant hooker Albert Stoute to launch an attack, and a floated pass put left wing Tom Agu-Benson, likewise making his Men’s 1sts debut, into space for the fifth Ealing try. 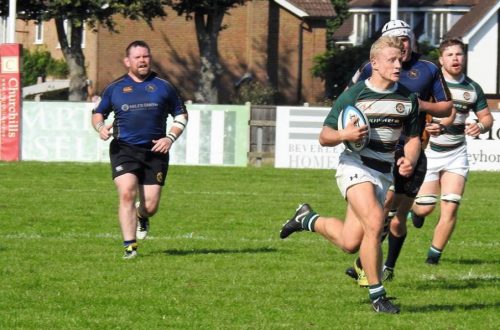 Turning around with a healthy 33-5 lead, Ealing understandably lost a little intensity as the game wore on, and the next two tries both went to Hertford, the first a rolling maul from 30 metres following yet another penalty, swiftly followed by another scored in the centre. With the lead suddenly reduced to 14 points doubt could have started to creep in, but Collins, in a man-of-the-match performance, set off on another powerful run and had the upper-body strength to shrug off an attempted tackle to make it to the line. Rose scored his second and his team’s seventh try of the afternoon, before Hertford secured a bonus point with their fourth try.

After an encouraging display, the Men’s 1sts sit out the next two weekends before returning to action in a Friday evening fixture on 21 September against London Irish.