Ealing conceded eight tries to a big, powerful Hertford side which completed the home-and-away double and provided ample evidence to explain why they are among the top four teams in the strong Zoo Shield League 2. However, the visitors fashioned the best try of the match, and were it not for a disastrous start and a weak period either side of the half-time whistle would have come away with a far closer score.

Despite good pre-match preparation, Ealing started slowly and found themselves behind after just 2 minutes, Hertford working the ball through several pairs of hands after turning over possession from the kick-off to finish wide out on the right, although there appeared to have been a knock-on during the build-up. A second try followed with 5 minutes on the clock, following a catch-and-drive. Ealing finally started to gain territory and reduced the deficit through a simple penalty by full-back Steve Verma. With a quarter of the game gone, Hertford moved further ahead, using their significant weight advantage to score a push-over try. 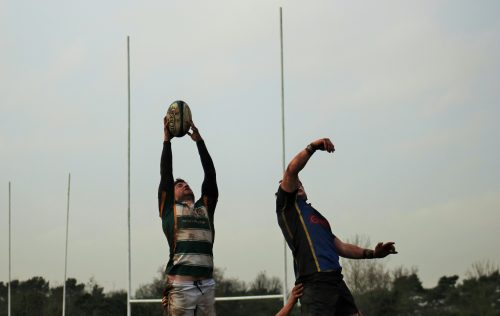 The visitors began to show greater invention and agility in the back line than their opposite numbers, and were rewarded with a fine try by inside centre Luca Townshend, who shrugged off three attempted tackles on his way to the line. Somewhat against the run of play, Hertford added a fourth bonus-earning try on the stroke of half-time, resulting in the enforced substitution of No 8 Marcus Lowe, who collided heavily with a goal-post in tackling the scorer. With all four tries converted, Ealing finished the half 28-10 down.

The second half began as badly as the first, with Hertford securing possession from the kick-off and finishing wide out on the right and producing another score in the same area a few minutes later.  With three-quarters of the game gone a period of pressure by the powerful home pack eventually led to another score, although scrum half Domenico Bongani appeared to get a hand under the ball to prevent it being grounded. An eighth and final try, the only one not to be converted, was created by an overlap on the left. Ealing finished the game strongly and came close to a consolation second try when replacement full-back Alasdair Stevens chipped behind the defence but saw the ball roll agonisingly over the dead-ball line before he could reach it.

The Men’s 1sts have a week off before the long trip to Clifton on 6th February.