A committed and confident Men’s 1sts pulled off a major surprise in beating the league leaders in a high-speed encounter in which the lead switched back and forth. With five fine tries, all scored by the backs, they made it 10 league points in two weeks and moved up two places in the table. 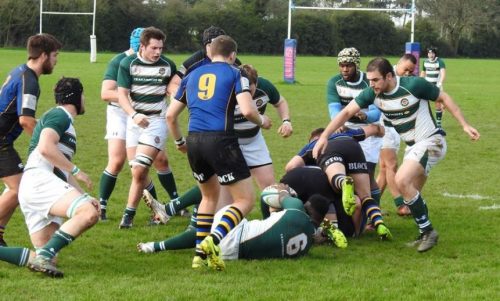 After a good warm-up in the spring sunshine, Ealing took the game to their opponents from the off, and there was no sign of the propensity to concede early tries that bedevilled them in the first half of the season. It was nevertheless Hertford who opened the scoring with a penalty after five minutes, for boring in at a scrum, although a strong Ealing attack soon afterwards drew an offside for Callum Nolan-Hutchison to bring the score back to parity. Ealing’s back line, which looked dangerous all afternoon, then put Ben Bridgewood into space, and the wing set off on a scorching run to finish to the right of the posts, Nolan-Hutchinson adding the extras. Hertford were next to score, through the hooker after a line-out steal, but the conversion attempt was missed. The home team then regained the lead with a well-timed pass out of the tackle, the conversion taking the score to 15-10 in their favour. Undaunted by this setback, Ealing put Hertford under pressure from the restart and an attempted clearance kick from under the posts, under pressure from flanker Stephen John, found its way to Nolan-Hutchinson, who floated a pass out to Bridgewood for his second try of the afternoon. The conversion from wide out on the right was successful, and with another penalty by Nolan-Hutchinson Ealing were approaching the break with an unexpected lead, but were pegged back to 20-20 when the Hertford right wing scored following a dominant set scrum.

Hertford began the second period strongly and should have taken the lead, but crucially a relatively straightforward penalty attempt at goal was missed. However, good support play eventually allowed them to move back into the lead with two forward tries. Maintaining their high-tempo game, Ealing kept up the pressure, and drew a mistake by the Hertford back line. The ball was knocked on in the centre, and was booted towards the Hertford line by Michael Rugeley, who won the race to touch down. The visitors then moved into a slender lead through another converted Bridgewood try, his third of the match, before Hertford scored again, crucially missing the two extra points on offer. Speed of thought by scrum-half Josh Steadman to take a quick tap penalty was then crucial in creating space for Rasaan Samms to finish with style out on the left wing, and with the conversion Ealing were four points to the good.

In a frantic final few minutes Hertford came close to snatching victory as their forwards pounded the line from two successive penalties, but Ealing dug in to secure what, surprisingly, was their first away win of the league season. 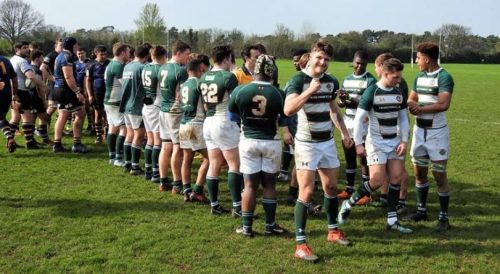 The Men’s 1sts have two more games before the season ends, the North West Middlesex Floodlit Cup final against Ruislip at Wasps on Wednesday 25 April and another tough fixture away to Wimbledon in the league on April 28th.