Ealing Trailfinders Number 8 Sam Hocking wants him and his teammates to ensure that from now on their first 20 minutes match their last.

Hocking was one of Ealing’ try-scorers against Cross Keys in the British and Irish Cup, along with Andrew Henderson and Billy Robinson, but by then the team were desperately playing catch up in a frantic last quarter that left them one try short of four-try and losing bonus points.

“I think to be perfectly honest that first 20 minutes killed us,” Hocking said. “We spoke about it at halftime and I think we gave away something like nine penalties in the first 20 minutes and probably three tries as well and we didn’t recover from that really.

“That first 10-15 minutes, from now on we really need to switch on because we’re shooting ourselves in the foot at the minute.”

Hocking has firmly established himself in the squad at Vallis way since he joined Trailfinders from Plymouth Albion over the summer. He has played all three positions across the back-row, but it is only in the last two weeks that he has been able to start in his favoured position of Number 8.

His try was his first since moving to west London, but he was a regular on the scoresheet during his time at Brickfields and he ended last season as Albion’s leading scorer with nine tries from 18 starts.

“I’m happier with the fact that I played another 80 minutes,” he said. “It is always hard; you go through pre-season and you don’t normally get that match fitness until you have a couple of matches under your belt taking hits.

“We were over the far side of the pitch,” he said. “Ed (Siggery) and Jack (Pattinson) did really well with the first carry to break through and from that we got quick ball and I just ran a little ball off Wardy (Ben Ward) and he gave it to me and there were only five metres to go.” 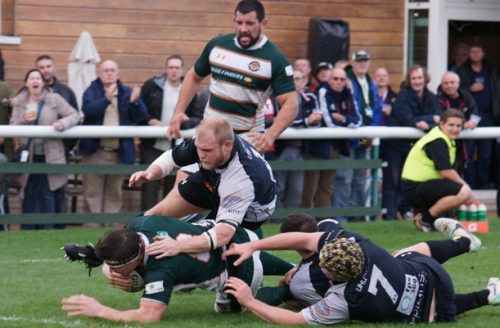