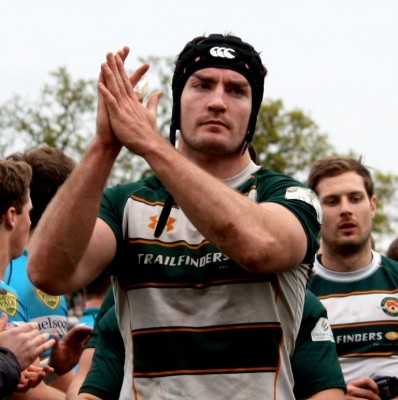 For Ealing Trailfinders captain Mat Evans the final whistle on Saturday will mark the end of his playing career, but over the 80 minutes he will be going all out to ensure that the team remains in the Greene King IPA Championship at the end of his and Director of Rugby Mike Cudmore’s final match for the club.

Ealing’s 26-21 win away to Plymouth Albion last time out meant that they lifted themselves off the bottom of the Championship for the first time this season and now sit two points above Jersey.

While Ealing host Rotherham Titans, who won 79-9 back in September and who are already assured of a play-off place, Jersey travel away to Bedford Blues. So long as Ealing match Jersey’s result they will guarantee Championship rugby, but Evans and the team are focusing on earning the win that will render Jersey’s result irrelevant.

“We’ve reached the stage of the season where each match is down to us,” Evans said. “We are not thinking of anything else other than going out against Rotherham and getting the win. If results go our way, then fine, but our only thought process is winning against Rotherham.

“Rotherham are a top side. They’ve been performing really well all year and have strength across the board, but we’ve identified where their strengths are and we have to nullify those.

“We’re a different team and I don’t think we’ll see a similar match (to the 79-9 loss). We are in a run of form and we will take that into the match on Saturday.”

Evans has been with Ealing since 2010 and featured in the sides that won promotion from National 2 South and then National 1. However, at the age of 32 and after a career that included a spells at Worcester Warriors and Cornish Pirates and featured call-ups to the Barbarians and England Counties, the man nicknamed ‘Horse’ has decided the time is right to step away from top-level rugby.

“I have a lot of fond memories and it has been a great period at the club,” he said. “I’ve been here four years and won promotions and if we remain in the Championship it will be a fantastic achievement and up with the best.

I’ve played some good rugby with a good bunch of boys, but this weekend my focus is on playing as well as possible against Rotherham and doing all I can do to get that vital win.”

With Mike Cudmore also ending his association with the club on Saturday, Evans believes that whatever the result and outcome on Saturday that the DoR can leave with his head held high.

“He has taken a club that was fairly small both infrastructure and on the playing side and grown that club into one of the top teams in the country,” he said. “A lot of that is down to his hard work and that has rubbed off onto the players.

“We understand what is required when we go to the pitch and he has been vital for Ealing. He will go down in history as one of the great coaches in Ealing rugby.”