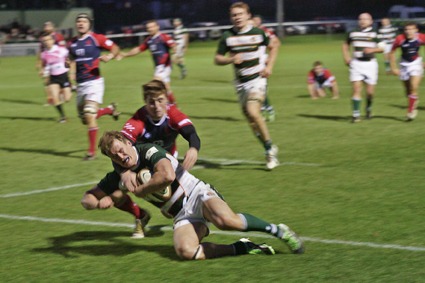 Chris Kinloch was the man who gave Ealing Trailfinders’ fans something to cheer about in the 36-10 loss to London Scottish on Sunday when he crossed for a try late in the match.

It wasn’t enough to spark a late comeback against an impressive Exiles sides, but it was his first in the Greene King IPA Championship and something he feels the side should be doing more often.

“It came from a period when we managed to look after the ball well,” he said. “We were coming round the corner and winning that race and getting on the front foot which opened up a bit of space.

“If we can do a bit more of that and be a bit more clinical in the red zone, we’ll get a few more tries and start being in these games and getting wins.”

The Scots’ try was Ealing first since hooker Josh Elliott went over against Plymouth Albion.

However, there were times in the match against the Exiles when Ealing enjoyed plenty of possession and territory, but were unable to breach the Scottish defence and which meant that the final result didn’t reflect the overall balance of the match.

“I think when we get in the red zone, we’re not clinical enough,” Kinloch said. “We don’t hold on to the ball and are not clinical off a set piece. At this stage you just can’t afford to do that.

“Tries for us have been few and far between for us. I think we’ve deserved a lot of tries this season that we just haven’t got.”