An encouraging win against Tring was followed by a disappointing loss to mid-table rivals London Irish, with unforced errors making the difference between two evenly matched teams.

After collecting the Ealing kick-off, Irish did not relinquish possession until 10 minutes later, although resolute defence prevented a score. When the visitors finally did manage to get their hands on the ball, the first of what was to prove to be a succession of knock-ons gifted possession back to their opponents, who were quick to seize the opportunity and score. Three further knock-ons followed within a few minutes, the last of which was capitalised upon to produce a second try wide on the left. Ealing did dominate in one aspect of the game, the set scrums, and were stopped just short of the line in a powerful surge. Soon afterwards they opened their account with a try on the right wing by Ben Bridgewood, with Harry Vidler unluckily striking the upright with his attempted conversion. 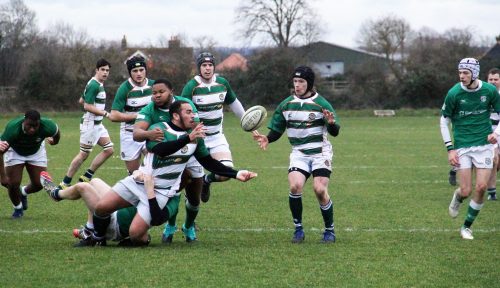 On the stroke of half-time the visitors went down to 14 men with a yellow card for foul language, but the first 10 minutes of the second half proved to be their best spell of the match, with some powerful runs into the heart of the defence by the forwards. Just before they were back to full strength, Ealing reduced the deficit to 2 points when fly-half Vidler kicked diagonally for wing James Booth to collect and pass to centre Afzaal Mir, who finished close to the posts. Irish then began to dominate territory again with well-judged kicks downfield, leading to a third try. Ealing continued to put the hosts under heavy pressure in the set scrums and with the deficit at 7 points needed just one score to draw level and gain 2 league points. Unfortunately, as the game moved into time added on yet another knock-on gave the Wanderers a scrum from which they worked the ball out to the left wing, crucially giving them a bonus point for a fourth try and at the same time depriving Ealing of the losing bonus they had been holding onto.

Next Saturday sees the Men’s 1sts make the short journey to Chiswick in the Middlesex Cup.