Ealing Exiles beat Northolt IIs in first half, but went on to lose by more in the second half, a tough day at the office for 15 and a half men of Ealing. Nick Greenhalgh reports from the back of the pack.

The team sheet was looking promising Friday evening, 18 players with me taking a rest, but three dropped out, and one didn’t show up. So I informed the Missus and donned the shirt to make up 15 on the nose. Only had one prop, but big bad brave Frenchman Stephane stepped up from his 2nd row slot and his massive frame filled the void in the front row.

We had a fair few guys playing out of position, Afe and Sean not regulars in the centres and Justin moving from 9 to 15, so things didn’t gel immediately. We let through two tries early in the first half before gaining composure. The scrum was working well, the line out less so. Our penalty count was pretty low and our oppos increasingly high. This and our strong rucking and scrummaging started to pay dividends. We go closer and closer to their line, wave after wave of attack and were awarded a penalty 5 yards out. I took a quick one fired into the Northolt fellas on their line, managed to twist in the tackle and ground the ball. Took the ref a while to get round to blowing for a try, but he did eventually and Eddie Beck added 2 point on with the conversion, (7 – 12). Shortly after we managed to repeat the pressure and move into the red zone. This time from a solid set piece scrum the front 5, we had a nice surge on. At number 8 I popped up with the ball quite early to take them by surprise, hit the fly half and offloaded on the inside to Jez (our scrum half) who bludgeoned his way over the line, allowing Eddie to convert and bring us into the lead (14-12).

The first half fizzled out without further ado. Sadly we had to loose Stephane at half time. Seemed our front row was now doomed and we would be 14 men, due to MMT regulations on uncontested scrums. However, Chanrda had arrived with 3 year old daughter Sylvie a little before half time and on being informed we could only play 15 if he played prop, he thankfully also manned up and had a go at scrummaging under the new laws. Sylvie managed to evade social services through clever use of the pitch side obstacles and Chandra got to relive his youthful dreams of playing front row again. Luckily the men from Northolt were not utter beasts and Chandra actually enjoyed the experience. However, our penalty count now started to creep, and we managed to lose our lead as they successfully fired two penalties through the posts (18 – 14).

Fitness and injuries started to take their toll, not to, mention the loss of a man mountain in the front row. Then Eff in the second row twisted his ankle, but played on, so we were effectively down an engine in the 2nd row, so the scrum started to falter as plumes of black smoke showed the young men from Northolt they could spin it more. A few Exiles remained at full strength and were putting in some big hits (Eddie Beck), but although we were 15 on the field we were like a wounded Elephant slowly but surely being picked apart by the hyenas of Northolt. We let in two late tries to their fast hands and legs (14-30). Though like a true survivor of the brutal Ealing fields this elephant had a last flurry of power and we surged back deep into the Northolt half and were sniffing at more points, but sadly (or may be not) the whistle blew and we could get back to the task of watching the NZ – SA game on the box, drinking Guinness talking nonsense and liking our wounds.

Shiner of the day: Flanker Kean Marden, does he regret moving into the pack from the backs, does he b#@locks! 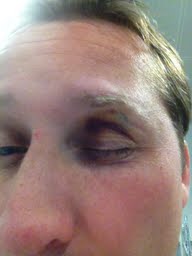 Quote of the day was overheard by one of our supporters listening to the Northolt coach/mgr something along the lines of: “They are older than you slower than you, pass it wide run round them”.   A fair comment, though luckily for us some of the old fellas were still able to put in the odd big hit and this advice wasn’t headed more till later in the 2nd half.

Big thanks to Northolt for being a pleasure to play against, very few niggles, great sports, we look forward to playing them again in a few months and hopefully turn the tables.