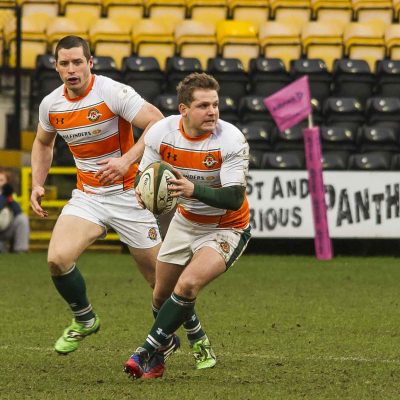 Ealing Trailfinders scored three first half tries and then dug deep under unremitting pressure to beat Nottingham for their second Greene King IPA Championship victory of the season.

Ealing led at half-time thanks to a brace of tries from Ronnie McLean and one from Phil Chesters. In the second half they had to weather a Nottingham attacking storm, but when centre Joe Munro was penalised for holding on in the tackle, Ben Ward was able to kick the ball off the pitch to seal the win from the first ever match between the two sides.

Ward scored the first points of the day when he slotted an early penalty after Nottingham were penalised for holding on in the tackle. Moments later they extended the lead further still when McLean linked with Andrew Henderson and Chesters to score a try that Ward converted for an early 10-0 lead.

The match settled into a pattern as both teams kept the ball in hand in an attempt to find a way through; eventually Nott’s captain Brent Wilson was driven over from a lineout, which Lynn converted to give the hosts the lead.

Their lead didn’t last long through as Chesters went over in the corner. Morgan Thompson took a quick tap from a penalty broke the line and fed the ball wide to the wing who held off the defence to touch down.

Nottingham hit back and twice tried to maul over from a lineout, but stout Ealing defence held them at bay and eventually Thompson’ box-kick cleared the danger. Minutes later a well-timed Henderson tackle forced a knock-on as their backs tried to run a move off the back of the scrum. 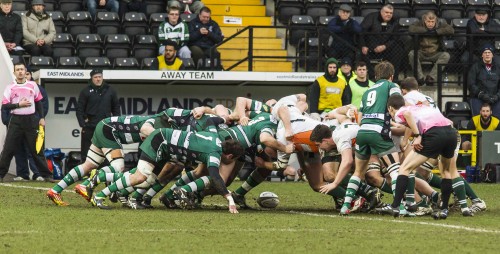 Lynn knocked over a penalty to pull Nottingham level at 15-15, but another Ward penalty put Ealing back in the lead and after the visitors were given one more chance to attack before the break, the forwards took the play close to the line before Ward released McLean for his second. With the conversion Ealing led 25-15 at halftime.

Nottingham came out all guns blazing in the second half and after their forward’s driving maul had been stopped they gave their backs the chance to have a run before Thompson and McLean combined to hold up centre George Catchpole over the line.

Eventually Wilson was driven over for his second try, but soon after Sean O’Connell and Henderson combined to carry fullback Andrew Savage back over his own line and after the scrum went down Ward calmly added another penalty.

The hosts continued to throw everything they had at the line and Wilson completed his hattrick from another rolling maul. They couldn’t find their way through again though and captain Adam Preocanin stole a lineout just as they were preparing a late surge.

O’Connell was ruled not to have scored a fourth, which would have secured a try-bonus point, before more great defensive play ensured that it would be a happy return back down the M1.