On a mostly bright but blustery afternoon and to the occasional accompaniment of thunder, the Men’s 1sts claimed their second bonus-point victory of the new season, putting them equal top of the table. However, a remarkable turnaround in the second half was needed to secure a fine victory over the second string of National 2 Wimbledon.

Wimbledon began strongly, dominating the early exchanges through their heavy pack, which sent Ealing backwards in the scrum and won crucial turnover ball. The pressure told in the seventh minute. The No 8 picked up from a scrum close to the Ealing try line but was stopped from scoring by Ealing scrum half Josh Steadman. The ball was recycled and worked out to the left wing, who just managed to get the ball down over the line under pressure. Six minutes later the visitors’ lead was extended by a second unconverted try, and with a quarter of the game gone it looked like an afternoon of damage limitation as the No 8 again was stopped just short of the line but offloaded to one of the two big props.

Soon afterwards Ealing showed signs of being able to get back into the game when Josh Steadman set off on a weaving run and finished under the posts, giving fly half Harry Vidler an easy conversion. The hosts were beginning to take the sting out of their heavier opponents, but conceded a fourth, bonus-point try just before the break, leaving the half-time score at 22-7 to the visitors.

Although the elements, if anything, were against them in the second half, Ealing achieved a remarkable turnaround as their bigger but older opponents visibly tired in the last half hour of the game. Rasaan Samms was put into space on the left wing to canter home for a try converted from close to the touchline by Max McMinn, who had just come onto the field to replace Vidler, followed by a fine solo effort by Will Day to reduce the deficit to just one point. Wimbledon then extended their slender lead with a penalty as the clock ticked down, but with the young Ealing team increasingly dominant thanks to their superior fitness levels, three tries in the last five minutes settled the issue. A penalty try was rightly awarded when James Booth was taken out without the ball in a scoring position, soon afterwards Josh Steadman cleverly kicked through for his brother Lewis to run on to the ball and score, and in time added on Josh claimed his second try, and his team’s sixth, darting through a demoralised defence. 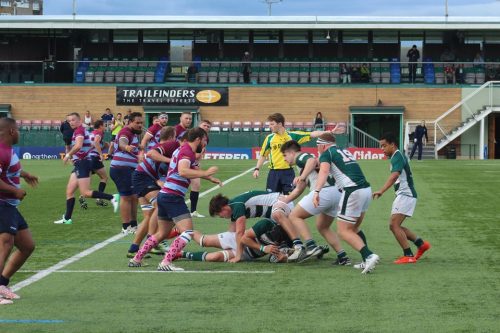 Next Saturday, 16 September, the Men’s 1sts travel to Shelford in Cambridgeshire, hoping to build on their impressive start.