On the warmest day of the year to date, Ealing gained a comprehensive seven-try win over a team which started one place above them in Zoo Shield 2, avenging a disappointing loss in Essex earlier in the season. Despite being under pressure for long periods of the game, they came out on top thanks to some excellent finishing and determined tackling.

The visitors went on the attack from the first whistle, but four minutes into the game a turnover enabled Ealing to move within striking distance with two 5-metre scrums, from the second of which lively scrum-half Josh Steadman scampered over the line, giving fly-half Callum Nolan-Hutchinson a fairly easy conversion. Five minutes later Colchester should have reduced the deficit after Ealing were penalised for off-side, but the attempt at goal failed. In what was becoming a good, even contest, it was incisive breaks and support running that looked likely to make the difference for the home side, and with a quarter of the game gone Steadman came close to doubling his tally but had the ball ripped from his grasp by the last defender. On the half-hour work the dominant Ealing scrum was penalised for losing the binding when heading towards the Colchester line. The penalty was kicked downfield, where inside centre Luca Townshend fielded the ball and ran back strongly. Quick recycling from the tackle led to a try wide out on the right by full-back Michael Rugeley, with Nolan-Hutchinson judging the strong breeze perfectly to nail the conversion. With the break approaching, Ealing moved further ahead when wing Chris Rose broke through the defence with a powerful run and gave a well-timed scoring pass to outside centre Ollie Morris. Colchester reduced the deficit at half-time to 21-5 with a driven maul. From the same spot as the earlier miss, the conversion was missed. 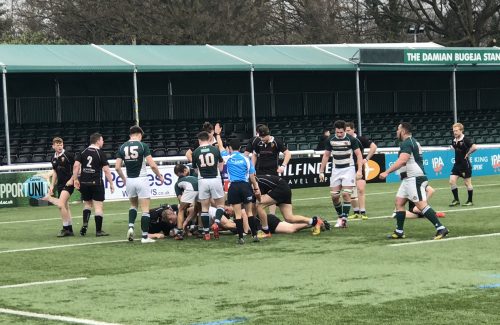 Fortified by coach Nick Lambert’s half-time talk, Ealing put the contest beyond doubt within a minute with a second try to Morris, and a typical sniping run brought another score under the posts for Steadman.

A period of little note followed before Colchester notched their second try with five minutes remaining. Ealing still had time to embellish the scoreline with a fine hat-trick try by Steadman and a good finish on the right wing by Afzaal Mir following smart passing along the back line. Harry Vidler, who had replaced Nolan-Hutchinson at fly-half, converted both late tries to bring the combined tally for the two kickers to six out of seven.

Next Saturday, 14th April, the Men’s 1st face a trip to high-flyers Hertford, then face Ruislip in the NW Middx Floodlit Cup Final on Wednesday 25th, before rounding off the season with the last league game, away to Wimbledon.