The Men’s Section teams returned from their successful tour to Bucharest and we’re pleased to report that we counted 38 tourists out and we counted 38 back home to blighty. 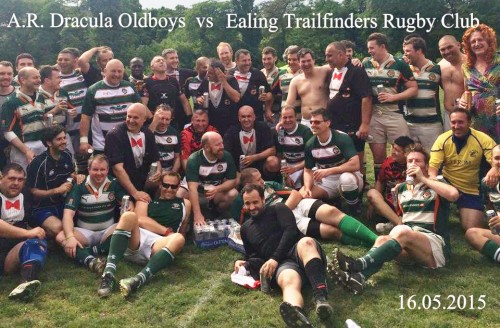 The teams converted from touch rugby to a sterner regime of regular training on 7th July. Training continues in earnest each Tuesday and Thursday, starting at 19:30 prompt. If you want further information contact Men’s Manager Ricky by EMAIL or on 07956 442502.

The first game this season is a friendly warm-up against Old Merchant Taylors on Saturday 22nd March. Thereafter the season starts in earnest.

This season the league allocations are

First Team Zoo Shield 2. This is a promotion which presents some stern fixtures. This is just the sort of action we’ve been seeking.

Second Team MMT2. The Seconds narrowly missed promotion so remain in a league that is still very competitive.

Exiles MMT5. The Exiles finished strongly last season so should go well in this league.

Evergreens Surrey Vets league. The Evergreens have transferred into this stronger league to ensure more fixtures for the coming season.