The Men’s 1sts tasted defeat for the second week running after a long unbeaten run in the Zoo Shield, but put in a vastly improved performance against the second string of a team currently sitting in the top half of National Division 2(S). While Ealing competed strongly throughout their first game on the 3G pitch at Vallis Way after six consecutive away fixtures, the well-drilled and highly motivated opposition ultimately had too much fire power, outscoring the Men by four tries to one.

An opening period of high intensity and no little skill saw Ealing mostly on the back foot, but committed tackling held Chinnor at bay. Nearly a quarter of an hour had been played before Ealing managed to string together their first meaningful attack, but they looked well capable of opening the scoring. However, after 19 minutes it was the visitors from Oxfordshire who finally broke the deadlock when they created a two-man overlap for the right wing to score in the corner, although there was a hint of a forward pass in the build-up. 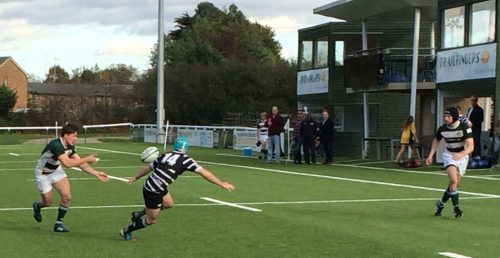 Undaunted, the green-and-whites threw everything into attack from the restart, and the referee yellow-carded a Chinnor player for cynically preventing release to deny a try-scoring opportunity. Just a minute later the visitors were down to 13 men when a forward was sin-binned for pulling down a maul in another dangerous situation. Ealing opted for a scrum, but Chinnor dug deep and eventually forced the ball into touch. The two-man advantage was eventually exploited with captain Adam Hulmston finishing off a sustained assault for a try well converted by centre Alex Hazell. Chinnor then regained the lead at the end of a first half that mysteriously only lasted 39 minutes despite numerous stoppages, with a penalty for not releasing.

The second half was dominated by the fit and highly organised visitors, who opened up a two-score lead two minutes after the break with the tight-head prop breaking off a maul ten metres from the line. The gap was increased to 18-7 with a penalty, and with the last quarter to come the visitors looked assured of a victory that was sealed with two further unconverted tries, the first following a break by the No 7 and the second the result of smooth passing and incisive running by the back line.

This Saturday, 1 November, sees the Men on the road again with a trip to Sussex to play East Grinstead before a break from league action for the autumn internationals.