It was very sad to read of the passing of John Mallinson and of Stuart Laird following on from Stuart attending John’s funeral. My thoughts are with the respective families. 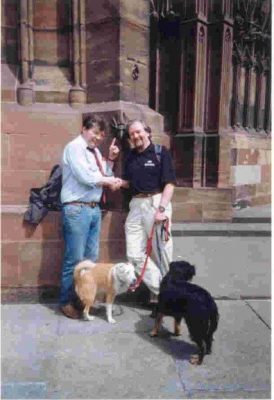 I would be obliged if you would consider placing the following on the website on the 1871 section it is a memory of Stuart Laird. George Haley ~ Former player 70s/80s. If you can place the photo (circa 2002/3) Stuart is on the left as you look at the photograph in the shirt and jeans I am on the right as you look in the Guinness T shirt and Chinos, the dogs were mine.

A story that comes to mind from seeing Stuart [n n n~never repeat a song] Laird on the Quiz Show 15-1 I enquired if they would pass on my details to Stuart to chat over old times, they obliged and duly had Stuart on the other end of the line. In the conversation I mentioned I was travelling down to France [from Germany where we live] for a holiday and Stuart said he had a ‘Students [?] Travel Card’ for the French Railway system, so why not meet up in Strasbourg, about the nearest point on our mutual journeys. Totally mad in some ways but what the heck you don’t often get the chance to see old friends when you leave the old country.

It was an eye opening moment for my wife when we met and the first question she asked after we eventually left Stuart at a Cafe in the main Square was “how on earth did the waiter understand his French!” For those that never met Stuart he had an accent that made Dennis McCanny sound like a 1950’s continuity announcer on BBC Radio 4 [or the home service as it would have been].

It was good to meet and chat about old times, old tours and remember the many friends that we missed from those halcyon days at Horsenden Hill. Glad to see Monty, Bob, Les and Derek remember him just as I do. Unique even in those days and at a Rugby Club that boasted many characters, he was truly a memorable part of Ealing’s history.