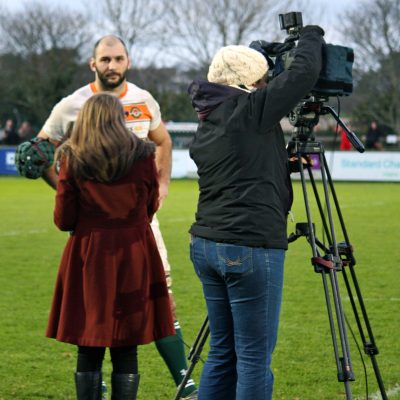 Ealing Trailfinders captain Adam Preocanin has called on himself and his teammates not to get carried away despite securing an opening Greene King IPA Championship victory over the weekend.

The big second row led his team to a 28-18 win away to old rivals Jersey at the weekend, which meant they left the Channel Islands with their first five points of the season following 10 fruitless matches.

Even so Preocanin knows they have to continue in a similar vein for the rest of the season if the men from Vallis Way are to survive.

“It is good to win, but we still have a lot of things to do,” he said. “We didn’t play that well in opening parts of the match and we need to address that.

“Just because we won our first match, we are still bottom of the league and still have a long journey to go on. We’re positive, but it is Monday and everyone has to go back to work on Monday.”

Nonetheless last Saturday at St Peters was an historic day for the club as they achieved their highest ever league victory.

Centre Tom Bedford went over for a try in the first half that fly-half Ben Ward converted, but at the break it was the hosts who led, 15-7.

After weathering an early storm in the first 20 minutes of the half as Jersey tried to put the result out of reach, Ealing launched a comeback over the last quarter and scored twice through wing Phil Chesters to take command of the match, before former-Jersey fullback Andrew Henderson popped up to secure the try-scoring bonus point.

“They threw everything at us,” Preocanin said, “but we defended a few driving mauls pretty well and in the end we gave away a penalty, but we could see they were physically tired and we knew if we continued to play as we do, chucking it around and moving them that we could do it.

“I think for the players and the playing staff it was an emotional rollercoaster because we didn’t play that well, except in parts. We didn’t start that well and put ourselves under pressure initially, but then coming back to win in such a way was a massive highlight.”

Ealing now face Moseley twice on consecutive Fridays in the British and Irish Cup; first up the M40 at Billesley Common and then back in W13 on Friday 13th.

While they won’t have the chance to pick up any more league points, the matches are important in maintaining the momentum before the final match of 2013, at home to Bristol in the Championship on 21 December.

“Even though the B and I Cup won’t help you stay up, it might give us an advantage over Moseley next time we play them,” Preocanin said. “Also those two weeks give you time to fine tune and rectify some of the mistakes we make in games before we go back into league matches.”